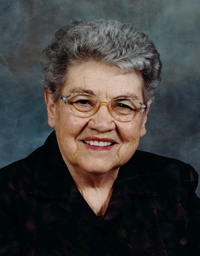 Katherine (Kay) Marshall passed away on Friday, November 25, 2016, at the age of 97 years of age, beloved wife of the late, Jacob Marshall. Kay’s memory will be treasured in the hearts of her children; Judy (Don) Skappak and their children, Nicole (Cory McKenzie), Laurie (Dean LaGrange), Trevor Skappak (Sandra); Virginia (Ron) Barnes and her children, Bart (Sheryl) Haahr, Shannon (Cory Cadrain), Jodi (Colin Romanow); Cynthia (Martin) Kaspers and their children, Danelle and Marty (Briana) Kaspers; Randy (Esther) Marshall and their children, Vaughn (Alecia) Marshall, Curtis Marshall, and Marci Marshall; Tim Marshall and children, Landon, Kassidy, Julia and their mother Danita Marshall. Her legacy will live on in her twenty-one great grand children, as well as her sisters-in-law, Katherine Marshall and Barbara Marshall, and several nieces and nephews. Kay was predeceased by her parents, George and Barbara Marsall; her husband, Jake in 2003; nine siblings, George, Christ, Rose, Matt, Frank, Joe, Mike, Barbara, Clem and son-in-law, Jerry Haahr. Kay was born and raised on the farm near Mendham, SK., and moved to Acadia Valley, Alberta in 1943 when she married Jake. This remained her happy home for sixty years where she stayed busy raising her family, being very involved with St. Mary’s Catholic Church, the C.W.L., the Community Club and the Sunset Club. Kay worked as the school custodian for 15 years before retiring in 1986. Although her house was small, the number of people that Kay hosted for family events was incredible. She loved sports whether participating herself, watching her kids or watching it on TV (especially the Blue Jays and curling). In 2003, Kay moved to the Oyen Lodge which she really enjoyed before moving into the Cypress View Lodge in Medicine Hat, in 2007. She continued her social lifestyle of playing cards, attending the evening music events and especially enjoying visits from her family. Over the years, Kay made many friends and they, like all of her family, will miss her dearly. We will always remember Mom with love, for her style, loving demeanor, forgiving attitude and devotion to her family. Those wishing to pay their respects may do so starting one hour prior to the Vigil Prayers and one hour prior to the Funeral Mass. Vigil Prayers will be recited at Cook Southland Funeral Chapel, 901 – 13 Street S.W., Medicine Hat on Friday, December 2, 2016, at 7:00 p.m. The Funeral Mass will be celebrated at Holy Family Parish, 1451 Strachan Road S.E., Medicine Hat on Saturday, December 3, 2016, at 10:30 a.m. with Reverend Father Philip Le Celebrant. Interment will take place at St. Peter and Paul Cemetery, Acadia Valley, Alberta, later in the day at 3:00 p.m. If friends so desire, memorial donations in Kay’s name may be made to the charity of your choice. (Condolences may be expressed by visiting www.cooksouthland.com) Honoured to serve the family is