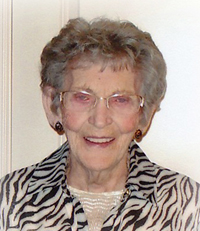 It is with mixed emotions that we announce the going home of Dorothy Seitz, a mother, grandmother, and great-grandmother on Tuesday, November 29, 2016 at the age of 92 years. We know our loss is heaven’s gain. Dorothy is survived by daughter, Shirley (Martin) Voeller; three sons, Gordon (June) Seitz, Rodney (Lorraine) Seitz, and Trevor (Michelle) Seitz all of Medicine Hat. Seven grandchildren, Kathy Voeller, Kevin (Tracy) Voeller, Kelly (Trena) Seitz, Dylan and Darren Seitz, Bryan (Kim) Seitz and Shaylene (Brandon) Seitz; four great-grandchildren, Mikayla McDonald, Austin & Lincoln Voeller, and Hudson Schlinker. She was predeceased by her husband, William in 1981 and her son, Kenny in 1967. Dorothy (Brack) Seitz was born April 20, 1924 in Medicine Hat to George Alexander and Meta Brack. She married William Seitz in 1944 and they lived in Seven Persons, Gadsby, and returned back to Seven Persons where she lived until 2014 at which time she moved to Chinook Village until her passing. The Funeral Service will be held at Cook Southland Funeral Chapel, 901 – 13 Street S.W., on Monday, December 5, 2016, at 10:00 a.m. with Pastor Maury McNeil officiating. Private family interment with follow at Hillside Cemetery. (Condolences may be expressed by visiting our website at www.cooksouthland.com) Honoured to serve the family is