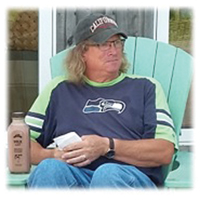 May 31, 1961 – December 6, 2016
Scott Francis McCray, dear husband of Pat McCray of Bow Island, passed away peacefully at the Medicine Hat Regional Hospital on Tuesday, December 6, 2016, at the age of 55 years following a brief illness. Scott will be remembered by his wife, Pat; daughter, Bailey both of Bow Island; son, Miles (Ashleigh) of Medicine Hat and his most favorite person in the world – his granddaughter, Mekah (and her mom, Jessy). Also cherishing his memory are his brothers, Allan (Luanne) of Abu Dhabi and their son, Stephen of Seattle, Glenn and his son, Caden of Lethbridge; father-in-law, Tom Yates of Lethbridge as well as Pat’s siblings, Russel (Rochelle) of Coaldale, Shelly and her daughter, Kaelin of Benalto and Murray (Jayne) and their sons, Clayton and Rohdy of Carseland. Scott was predeceased by his parents, Lawrie and Florence; grandparents, Lawrence and Ruth McCray, Marjorie Nosser, and his mother-in-law, Midge Yates. Scott was born on May 31, 1961, in Calgary and spent his early childhood living in Delburne above the Bank of Montreal where his parents both worked. The family moved to Coaldale where he took his schooling graduating in 1979. Scott started working with Calgary Power in Taber and was sent to Bow Island in 1981 as a floater for a few weeks and ended up staying. His career as a power lineman lasted for 35 years. It was at the bowling alley in Bow Island where he met Pat and they married in Las Vegas 30 years ago. Scott was a faithful fan of the Seattle Seahawks since 1976, having made it to a few games in Seattle. He enjoyed spending time with great friends (and you know who you are); travelling, including visits to Eastern Canada, San Francisco, Belize and Hawaii; driving his Chevelle; feeding the inside and outside birds and playing with Mekah. He will be dearly missed by all who knew and loved him and we will treasure all of the memories. Scott was not one for dressing up, so casual attire is fine; Seahawks gear would be wonderful. A Celebration of Scott’s life will be held at Cook Southland Funeral Chapel, 901 – 13 Street S.W., Medicine Hat, on Saturday, December 10, 2016, at 1:00 p.m. with Life Celebrant Gerry Getz officiating. (Condolences may be expressed by visiting our website at www.cooksouthland.com). If friends so desire, memorial contributions may be made to the Alberta Birds of Prey Foundation, 2124 – 16 Avenue, Coaldale, Alberta, T1M 1M8, a charity near and dear to Scott. Honoured to serve the family is
Cook Southland Funeral Chapel, 901 – 13th Street S.W. Medicine Hat, Alberta T1A 4V4 Phone 403-527-6455