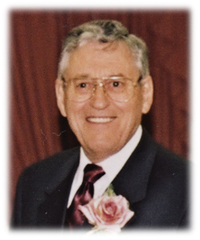 1925 – 2016
It is with sadness that the family of Dale Franklin Wagner, beloved husband of Adeline Wagner, announce his passing at the Medicine Hat Regional Hospital on Friday, December 9, 2016, at the age of 91 years. Dale was born on a homestead farmhouse near Consul, Saskatchewan, the first of five children born to Rosa and Jess Wagner. He attended Zentner School, completing grade eleven. Dale married Evelyn Spitzer from Maple Creek on June 8, 1951 in Medicine Hat. They spent many years together before Evelyn passed away on February 23, 1996. Dale had some lonely years until he met Adeline Fesik and they were married on June 1, 2002. Throughout his life Dale’s main occupation was in sales and during his career he managed several Macleods stores in Saskatchewan and Alberta. He was also employed by Eaton’s in Medicine Hat and he and Evelyn managed the Imperial Motor Inn for a period of time. Dale also led trail rides in the Cypress Hills for a few years which was his most relaxed and enjoyable work experience. He enjoyed family gatherings and always had a joke or prank to play. He played cards with canasta and crib being the favourites. Dale enjoyed sports and watched hockey, baseball, played golf and coached a girls baseball team for a while in Shaunavon. Dale often spoke of his three months in Upsalla, Ontario where he was in a “bush camp” with his cousin, Les Tenborg. The “easterners” knew little of the prairies and in Dale’s words, “this triggered a lot of old fashioned tale telling and generated a lot of laughs!” Dale was a man of faith and was baptized as one of Jehovah’s Witnesses in 1958, and was devoted until he fell asleep in death. Dale will be remembered by his wife, Adeline; two daughters, Mae (David) Grubbe and Iris (Weldon) Hehr; four grandchildren, Lisa Grubbe, Shelly Grubbe, Ryan Hehr and Andrea Hehr; Adeline’s children, Arnold, Vi, Alvina, Alvin and Diane; one brother, Douglas (Jeanine) Wagner as well as numerous in-laws, nieces and nephews. Dale was predeceased by his first wife, Evelyn Wagner; parents, Rosa and Jess Wagner; siblings, Mary (Dominick) Messmer, Norma (Stan) Popick and Martin (Dorothy) Wagner. The Funeral Service will be held at the Kingdom Hall of Jehovah’s Witnesses, 62 Valleyview Drive S.W., Medicine Hat, Alberta, on Saturday, December 17, 2016, at 2:00 p.m. with Mr. Rod Sideroff officiating. (Condolences may be expressed by visiting our website at www.cooksouthland.com) Honoured to serve the family is Cook Southland Funeral Chapel, 901 – 13th Street S.W. Medicine Hat, Alberta T1A 4V4 Phone 403-527-6455