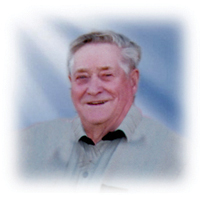 December 15, 1931 ~ December 11, 2016
Mr. Ewald Adolf Link of Medicine Hat, beloved husband of Mrs. Anna Link, passed away on Sunday, December 11, 2016, at the age of 84 years. Along with Anna, Ewald leaves to cherish his memory: two daughters, Sherry (Adolf) Erdmann of Seven Persons and Sandra (Brandon) Bullock of Sylvan Lake; six grandchildren, Anne deGraaf of Calgary; Lea (Daryl) Drysdale of Medicine Hat, Kristin (Blake) Crawford of Rocky Mountain House, Rochelle (Cade) Scott of Red Deer, Zachary Bullock of Sylvan Lake and Matthew Erdmann of Lethbridge; six great-grandchildren, Luke, Emily and Evan Drysdale; Charley and Jake Crawford and Harrison Scott. He is also survived by a sister, Marta Mezei of Medicine Hat; sister-in-law, Herta Link of Medicine Hat; Goddaughters, Barbara (Mervin) Mardian of Dunmore and Beverly Link of Medicine Hat as well as numerous nieces, nephews and in-laws. Ewald was predeceased by his father, Adam (1933); mother, Adeline (1993); brothers, Waldemar (2000) and Albert (2008) as well as two infant sisters, Olga and Adele. Ewald was born on December 15, 1931 in Michelowka, Kr. Luck, Poland. He and his family later relocated to Germany where he was raised and educated. Along with his family, Ewald immigrated to Canada on January 18, 1949. They settled in the Medicine Hat area, where Ewald began work building houses in the construction industry. On April 6, 1957, he met and married Anna Dyck in Medicine Hat. Ewald and his brothers formed Link Brothers Construction. They spent many years building residential and commercial buildings throughout British Columbia, Alberta and Saskatchewan. He enjoyed gardening, growing beautiful roses and vegetables… mainly onions! Later in life, fishing was very dear to him, but nothing topped spending time with family at special occasions. Those wishing to pay their respects may do so at Cook Southland Funeral Chapel, 901 – 13 Street S.W., Medicine Hat on Thursday, December 15, 2016, between 7:00 p.m. and 8:00 p.m. as well as on Friday, December 16, 2016, starting one hour prior to the service. The Celebration of Ewald’s life will be held at Cook Southland Funeral Chapel on Friday at 2:00 p.m. with Reverend Shane Hein officiating. Interment will follow at Hillside Cemetery with a time of fellowship thereafter in the Cook Southland Reception Facility. (Condolences may be expressed by visiting our website at www.cooksouthland.com) Honoured to serve the family is Cook Southland Funeral Chapel, 901 – 13th Street S.W. Medicine Hat, Alberta T1A 4V4 Phone 403-527-6455