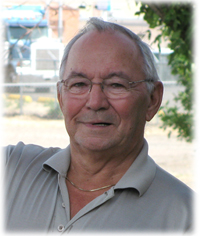 1942 ~ 2016
With heavy hearts the family of Richard Cecil Hemmaway, beloved husband of Sandy Hemmaway, announce his passing at the Foothills Hospital in Calgary on Wednesday, December 14, 2016, at the age of 74 years. Richard was bor April 5, 1942 in Pincher Creek, Alberta. As a young man, he enlisted with the Canadian Forces and was training in artillery when he served a peacekeeping mission in Germany. In 1963, he met and fell in love with Sandy. They were later married and blessed with the births of three children, Tammy, Tim and Shawn. Richard was a hard working man all his life to provide for his family.He worked for Nitro Chemical for many years and then Capital Glass for 21 years before owning and operating Quality Hardwood Floors. This was a successful business he operated until 2001 when he retired and turned over to his son. As a young man in his prime, he enjoyed skiing and played golf until his health began to fail. He had many talents including hand-crafting clocks which he made for his family and on occasion he would pull out an old rusty trumpet and surprise everyone with the music he would make with it! Richard was a member of the Royal Canadian Legion and spent much time there with his friends playing cards. He will be deeply missed by his wife, Sandy; children and grandchildren: Tammy Lehman and her daughters, Courtney and Caitlynn; Tim (Marlette) Hemmaway and their children, Thereon and Colton; Shawn Hemmaway and his children, Kerigan and Reegan; a sister, Joan Vollman as well as numerous nieces, nephews and extended family. He was predeceased by his parents, Ernest and Ethel Hemmaway and a sister, Eunice (Curtis) Slessor). Richard’s life will be celebrated at Cook Southland Funeral Chapel, 901 – 13 Street S.W., Medicine Hat on Tuesday, December 20, 2016, at 11:00 a.m. with Major Murray Jaster officiating. Private interment will follow with a reception thereafter in the Cook Southland Reception Facility. (Condolences may be expressed by visiting our website: www.cook southland.com) Richard loved dogs and in reflection of this memorial donations in his name may be made directly to the SPCA, 55 Southwest Drive S.W., Medicine Hat, Alberta, T1A 8E8. Honoured to serve the family is

Leave a Condolence for Cora-Lee Jones