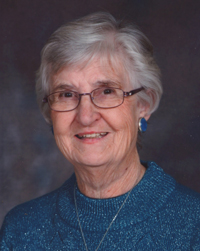 The family of Florence Matz would like to announce her passing in Lethbridge on Friday, December 16, 2016 at the age of 82 years.

The Funeral Mass will be celebrated at St. Augustine’s Catholic Church, 5009 – 48 Avenue, Taber on Wednesday, December 28, 2016 at 11:00 A.M. Burial to follow at the Taberâ€ˆMemorial Garden. Condolences may be forwarded by visiting our website at www.southlandfuneral.com.

She was predeceased by her husband John Matz, sister Jean Haugen and brother-in-law Leo Haugen.

Florence was born May 19, 1934 in Granum to parents Alex and Lizzie Bell. She grew up on the family ranch west of Claresholm and left home at seventeen to teach school in a private home. She later moved to Calgary to work for CNR, where she met John on New Year’s Eve. After a June wedding in 1956, they moved to Richmound, Saskatchewan to farm with his family. In 1964 they relocated to Burdett with the four oldest children to start a new farm and add two more children to the family.

Florence was active in the community and was always involved with the Grassy Lake CWL. For many years she volunteered with the Burdett Community Hall Auxiliary organizing and cooking countless suppers for weddings and other functions.

Florence was top bowler in both Bow Island and Taber leagues. She started bowling shortly after the Bowling Alley in Bow Island opened and continued weekly in Taber until her late seventies. Another favorite pastime was playing various card games and dominoes with her family and friends. She was very well read and self-educated reading at least one book a week.

She always loved to travel which was hard during the early years on the farm. After Florence and John retired from farming they began visiting family and friends around British Columbia and parts of the United States. After John passed away Florence took several trips and cruises, many with her sister Jean, visiting Hawaii, Alaska, Newfoundland, Las Vegas, the Grand Canyon, Victoria and more.

Florence was a true farm wife; driving truck and tractor, chasing cows, raising her children and then helping with grandchildren. Finally, after thirty five years on the farm in Burdett, Florence and John moved to Signature Lane in Taber enjoying their retirement years surrounded by friends. After John passed in 2009, Florence continued to live at Signature Lane for a number years before moving to Clearview Lodge in Taber where she was with more friends. Florence spent her last two years at St. Michael’s Health Centre.

If friends so desire, memorial tributes in Florence’s name may be made directly to the Alzheimer Society of Alberta, 402, 740 – 4 Avenue South, Lethbridge, Alberta T1J 0N9 (www.alzheimer.ca).

The family would like to express their gratitude to the staff at both Clearview Lodge, and St. Michael’s Health Centre for the amazing care and compassion they provided Florence during her final years.