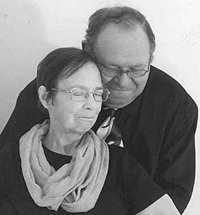 Joyce beloved wife of David Martin of Airdrie, passed away on December 14, 2016 at the age of 67 years.

Those wishing to pay their respects may do so at McINNIS & HOLLOWAY FUNERAL HOMES (Airdrie, 300 Towerlane Drive) on Tuesday, December 27, 2016 at 2:00 pm.

There will be a spring celebration of life for those who cannot make it during this busy time of year. In lieu of flowers the family asks that donations be made in Joyce’s name to the Scleroderma Foundation of Canada. Condolences may be forwarded through www.mcinnisandholloway.com.

Leave a Condolence for Vi Sheridan