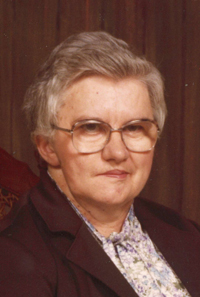 Pearl Isabelle Gatz, beloved wife of the late Clarence Gatz, passed away in Bow Island on Tuesday, December 20, 2016 at the age of 86 years.

The Funeral Mass will be celebrated at St. Michael’s Catholic Church, 1113 – 1 Street East, Bow Island on Tuesday, December 27, 2016 at 11:00 A.M. Burial to follow at the Bow Island Cemetery. Condolences may be forwarded by visiting our website at www.southlandfuneral.com.

Pearl is survived by her son Lorne Gatz of Bow Island and her grandchildren Derek Gatz of Saskatoon, Saskatchewan and Karli Gatz of Medicine Hat.

She was predeceased by her husband Clarence, brother Melvin and sisters Kathy and Jean.

Pearl was born in Bindloss, Alberta on March 21, 1930 to parents William and Bella Loughridge. She attended school in the Social Plains one room school house and finished her education in Medicine Hat. After high school, she took a Certified Nursing Aide course in Calgary. Pearl married Clarence Gatz in 1952 and they moved to Bow Island where she continued to resided after his unexpected passing in 1971.

If friends so desire, memorial tributes in Pearl’s name may be made directly to the Bow Island and District Health Foundation, c/o Bag 3990, Bow Island, Alberta T0K 0G0.