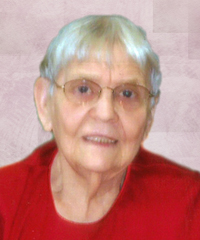 Anne Katherine Folk of Medicine Hat, beloved wife of the late Andrew Folk, passed away at the Valleyview Nursing Home on Sunday, December 25th, 2016 at the age of 94 years. Anne leaves to cherish her memory three sons, Gerald (Edna) Folk, Doug (Bernie) Folk and Allan (Gloria) Folk; one daughter, Yvonne Harder (Peter Leeming); eight grandchildren, Steven (Tammy), Joelle (Ian), Angela (Daniel), Kim (Jamie), Sarah, Heidi (Lonnie), Scott and Andy (Jenn); fifteen great grandchildren; as well as numerous nieces and nephews. Anne was predeceased by her husband, Andrew; one son, Arnold Folk; one daughter, Cynthia Wells; one granddaughter in infancy, Crystal Andreas; her parents, Robert and Josephine Ehman; five brothers; and four sisters. Anne was born on November 25th, 1922 in Holdfast, Saskatchewan. It was in Holdfast that she married Andrew on October 18th, 1943. She worked as a teacher in Holdfast before moving to Medicine Hat in 1968 where she worked for several years at the Petite Shop. Anne was a resident of the Teeoda Lodge for the last several years. She will be missed by all those who knew and loved her. Those wishing to pay their respects may do so at SAAMIS MEMORIAL FUNERAL CHAPEL, 1 Dunmore Road SE, on Thursday from 7:00 p.m. to 8:30 p.m. and Friday from 9:30 a.m. until 10:55 a.m. The Funeral Service will be held at SAAMIS MEMORIAL FUNERAL CHAPEL, on Friday, December 30th, 2016 at 11:00 a.m. with Father Francis Tran officiating. A private interment will take place at Hillside Cemetery. Memorial gifts in Anne’s memory may be made to A.J.’s Loan Cupboard, P.O. Box 45006, MacKenzie Drug Post Office, Medicine Hat, AB, T1A 0B1 or to Home Care, c/o Medicine Hat & District Health Foundation, 666 – 5th Street SW, Medicine Hat, AB, T1A 4H6. Condolences may be sent through www.saamis.com or to condolences@saamis.com subject heading Anne Folk. Funeral arrangements are entrusted to