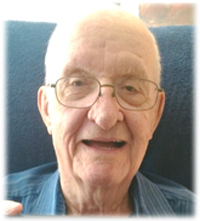 The family of Ernest Marchand sadly announce his passing at St. Joseph’s Home – Carmel Hospice in Medicine Hat on Tuesday, December 20, 2016, at the age of 91 years. Dad was born in the 2-14 area and moved to the 1-17 at an early age. He attended a one room school house and rode his horse to school. After the usual antics of a growing boy, he moved to and worked on a ranch owned by Ben and Clisty Sproat south of Milk River. After joining the Army and training to be a motorcycle dispatch rider, he tells the story of coming home for visits and returning late for the train and missing his leave deadline because he stayed at Clisty’s for one more day, for her Sunday Roast Chicken. Military punishment was doled out accordingly, but was well worth it. After the war, he came to Medicine Hat to work for his brother-in-law. He met and married mom, and worked in Western Canada in the early days of the Oil Patch. Returning to the Hat, he worked at: Craftsman Wood Products, where he built and installed aluminum window awnings on several buildings around town, including St. Joseph’s Home (1956) where he spent the last month and a half before his passing; Gas City Planning Mill, where City Hall now sits, where he built door and window units for many of the post-war raised bungalows on the SE and SW Hill; Canada Post, where he was a mail carrier and an inside sorter; Oglive Flour Mill; and CFB Suffield, as a Materials Handling Operator for the British Army Training Unit for approximately 25 years. He and mom raised 3 boys, and he passed on his love of motorcycling to all of us, and his love of flying to 2 of us. He loved country music, camping, and fishing, and sold his car top boat at approximately age 75, when it suddenly got very heavy from too much fishing, so he said. It was never confirmed. Never to be out-done by anyone, he was an avid joke teller and loved to trade jokes and stories (lies) with anybody. He had lost his little finger of his left hand, and was instantly dubbed 3-fingered Ernie by his co-workers. He loved a cool one while sitting outside. He wore out the webbing on his favorite chair and fell thru the seat…and couldn’t get out…and nobody had a camera that day. It was the 80’s. Voted ‘Most Told Story’ by the rest of the family. He had a love for animals; cats, dogs, horses…cows…not so much. He treated his mother-in-law (our grandma) with respect and compassion, giving her a room during the last years of her life. Ernie will be remembered by his wife of 69 years, Eileen; three children, Perry Alan (Diana), Kenneth Edward and Dean Russel (Kim); five grandsons, one granddaughter, seven great-grandsons and two great- granddaughters. He was predeceased by his parents, William & Felicity Marchand (nee Patenaude); a daughter-in-law, Mary; six brothers and four sisters. A Celebration of Ernie’s life will be held at Cook Southland Funeral Chapel, 901 – 13 Street S.W., Medicine Hat on Thursday, December 29, 2016, at 2:00 p.m. with Life Celebrant Gerry Getz officiating. (Condolences may be expressed by visiting our website at www.cook southland.com) Honoured to serve the family is

One Condolence for “ERNEST MARCHAND”