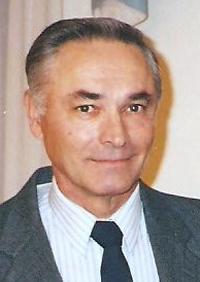 With heavy hearts, the family of Rudy Pfeifer of Medicine Hat announce his passing on Wednesday, December 21st, 2016 at the age of 80 years. He leaves to cherish his memory his beloved wife, Elaine; son, Rodney (Rhonda); daughter, Carrie Berthelette (Wayne); grandchildren, Clayton Berthelette (Gina), Marci Pfeifer (Tim), Ryan Berthelette and Stephanie Pfeifer; also, his sisters, Marion Leis and Annette Guenther (Ron); brothers, Leo (Josephine), Alan and Douglas (Bev); as well as numerous nieces, nephews and extended family. Rudy was predeceased by his parents, Henry and Olga Pfeifer; brothers, Stanley, Richard and Martin; and sister, Florence. Rudy was born in Runnymede, Saskatchewan where he grew up on the family farm. At nineteen he was hired onto the C.N.R. where he worked as a locomotive engineer for 34 years. A private service will be held Wednesday, December 28th, 2016. As an expression of sympathy donations may be made to the Parkinson’s Society of Southern Alberta, 102 – 5636 Burbank Crescent S.E., Calgary AB, T2H 1Z6. Condolences may be sent through www.saamis.com or to condolences@saamis.com subject heading Rudy Pfeifer. Funeral arrangements are entrusted to