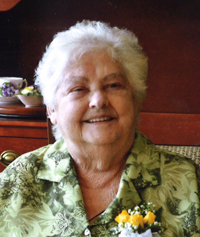 Julia Catherine “Cathy” Bodin of Medicine Hat, beloved wife of the late Gaston Bodin, passed away on Tuesday, December 27th, 2016 at the age of 82 years. Cathy leaves to cherish her memory her son, Leon (Betty) Bodin; her daughter, Jeanne (Les) Mohr; her daughter-in-law, Linda Bodin; six grandchildren, Angela (Trevor) Hogg, Corissa (Ryan) Tangen, Shane Mohr, Melissa (Trevor) Johannsen, Jason Bodin, and Ryan Bodin; seven great-grandchildren, Payton and Jake Hogg, Cole and Gavin Tangen, Daiton and Blake Johannsen, and Asha Bodin; two sisters, Donna Storozuk (Phil) and Marlene Lee; as well as numerous nieces and nephews. Cathy was predeceased by her husband, Gaston Bodin; her parents, George and Elizabeth Mott; and one son, Anthony Bodin. Cathy was born in Hartney, Manitoba where she was raised and educated. She then lived in Estevan, Saskatchewan for approximately seven years before moving to Calgary in 1973. Cathy worked for Alpha Milk Dairy World for 25 years and moved to Medicine Hat in 2000. She enjoyed camping, quadding, snowmobiling, and gardening and was a very social person. Cathy will be greatly missed by her family and friends. Those wishing to pay their respects may do so at SAAMIS MEMORIAL FUNERAL CHAPEL, #1 Dunmore Road SE, on Monday from 10:00 to 10:55 a.m. The Funeral Service will be held at SAAMIS MEMORIAL FUNERAL CHAPEL on Monday, January 2nd, 2017 at 11:00 a.m. with Gary W. Goran officiating. Memorial gifts in Cathy’s memory may be made to the Alzheimer’s Society, #201, 770 – 6th Street SW, Medicine Hat, Alberta, T1A 4J6. Condolences may be sent through www.saamis.com or to condolences@saamis.com subject heading Cathy Bodin. Funeral arrangements are entrusted to