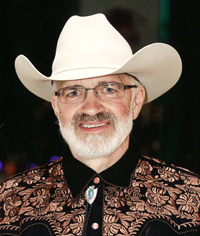 My heart is sinking like the setting sun, as my cowboy rides away. It is with heavy hearts that we announce that James Otto Hahn passed away at the Medicine Hat Regional Hospital on Friday, December 23rd, 2016 at the age of 63 years young. He leaves to cherish his memory, his wife of 39 years Mary-Ellen; daughter, Desirée and son-in-law, Jesse Bender; mother-in-law, Dorinda Hawes; in laws, nieces and nephews; Gail and Bob, Jonathan (Cait), Jacqueline (Ryan), Jennifer West; Earl, Nathan (Tara), Stacey (Ken) Hawes; Dorindy and Marvin, Tatiana (Vincent), Sara (Mat) Reyes-Hawes; Colin and Chrissy, Royce, Bailey Hawes; Michael and Cherie, Cayden, Madyson Hawes; and numerous grand nephews and nieces. He was predeceased by his only son, Shelby David James; father, Otto Hahn; father-in-law, David Hawes; sister-in-law, Bonnie Hawes; and brother, Rockie Hahn. Jim was born on the first day of spring March 20th, 1953 and met his future wife in Calgary in 1977; they married a year later in 1978. Along with their baby daughter they moved to Medicine Hat in 1981. In 1984 he bought his first carpet cleaning business and branched out into janitorial cleaning. An accident forced him to dissolve the carpet cleaning part until 1994 when he bought Kleenasaire Cleaning Services and Janitorial. Jim worked right up until the end, “almost”; he enjoyed his work and would meet new people every day. Jim really loved spending time with his loved ones, going to the movies, fishing, rebuilding trucks with his son-in-law, he loved working in his yard, family vacations, road trips, and camping. We would like to send out a special thank you to the Doctors, nurses, health care aids, volunteers and everyone else who took care of Jim at the Palliative Care ward on the 6th floor of the Medicine Hat Regional Hospital. The care and compassion that you showed for Jim and his family was awesome. Words cannot express how grateful we are. A private time of remembrance will be held in July 2017. Memorial gifts in Jim’s memory may be made to the Medicine Hat & District Food Bank Association, 532 South Railway Street SE, Medicine Hat, Alberta, T1A 2V6 or to the Medicine Hat Women’s Shelter Society, P.O. Box 2500, Medicine Hat, Alberta, T1A 8G8 or to the Palliative Care Unit, c/o Medicine Hat & District Health Foundation, 666 – 5th Street SW, Medicine Hat, Alberta, T1A 4H6. Condolences may be sent through www.saamis.com or to condolences@saamis.com subject heading James Hahn. Funeral arrangements are entrusted to