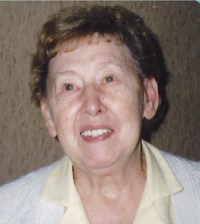 Edna Elsie Schneider of Medicine Hat, beloved wife of the late Arthur Schneider, passed away on Monday, December 26th, 2016 at the age of 91 years. Edna leaves to cherish her memory one son, Gordon (Dianne) Schneider of Medicine Hat; four grandchildren, Jason Schneider (Carol) of Seven Persons, Graham Schneider of Calgary and his daughter Sadie, Christopher Schneider (Karri) of Edmonton, and Leanne (Chad) Lapierre of Calgary and their daughter Ashlynn; one sister-in-law, Clara Anhorn; as well as numerous nieces and nephews. Edna was predeceased by her husband, Arthur Schneider; her son, Glenn (Linda) Schneider; her parents, Oscar and Johanna Anhorn; her granddaughter, Jeanine-Lynn; her brother, Herbert Anhorn; and her sister, Esther (Hilbert) Flaig. At Edna’s request, a Private Graveside Service was held at Hillside Cemetery, Gershaw Drive and 10th Avenue SW, on Friday, December 30th, 2016 with Gary W. Goran officiating. Memorial gifts in Edna’s memory may be made to the charity of one’s choice. Condolences may be sent through www.saamis.com or to condolences@saamis.com subject heading Edna Schneider. Funeral arrangements were entrusted to