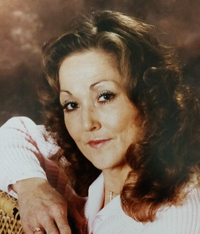 Lucille “Lucy” Caroline Skorupa-Glagau of Medicine Hat, beloved wife of the late Edward “Ed” Glagau, passed away on Tuesday, December 27th, 2016 at the age of 73 years. Lucille leaves to cherish her memory her two daughters, Shalease (Barry) Sharawara and Colleen DeJong and her son, Michael Hankey; two brothers, Cash Skorupa and John (Barb) Skorupa; one sister, Florence (Gerald) Black; as well as numerous nieces and nephews. Lucille was predeceased by her husband, Ed Glagau; her parents, Gust Skorupa and Jenny Jans; her step father, Gotlieb “Gib” Jans; and her sister, Nora Elder. Lucille was born on November 7th, 1943 in Medicine Hat and was raised at Hatton, Saskatchewan. She took her nurse’s training in Medicine Hat. Lucille married Ed DeJong in Claresholm and, over the years, resided and worked in Claresholm, Blairmore, and Lethbridge. While working in Coaldale, she married Ed Glagau on September 8th, 1991. They made Consul, Saskatchewan their home until moving to Seven Persons in 2004. Lucille continued to reside there until moving to Medicine Hat in August of 2015. She loved farm life, gardening, and will be remembered for her big heart towards the elderly and less fortunate. Her faith was of utmost importance to her and she will be sadly missed by her family, many friends, and all who knew her. The Funeral Service will be held at the SALVATION ARMY CHURCH, 164 Stratton Way SE, on Tuesday, January 3rd, 2017 at 10:30 a.m. with Major Murray Jaster and Pastor Dennis Becker co-officiating. Interment will take place at the Maple Creek Cemetery later in the spring. Memorial gifts in Lucy’s memory may be made to the Salvation Army Resource Centre, 164 Stratton Way SE, Medicine Hat, Alberta, T1B 3R3 or to the Hope Street Compassionate Ministry Centre, c/o Reverend Murray Alan Kumm, 4072 Strachan Road SE, Medicine Hat, Alberta, T1B 4Y3. Condolences may be sent through www.saamis.com or to condolences@saamis.com subject heading Lucy Skorupa-Glagau. Funeral arrangements are entrusted to