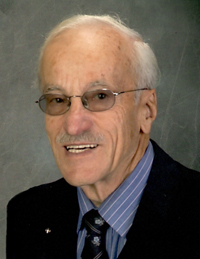 It is with deep sadness that the family of Roy Weiss announce his passing at South Country Village on Wednesday, December 28, 2016 after a battle with cancer. Roy will be lovingly missed by Gloria, his best friend and wife of 54 years. Also mourning his passing are his children: Brenda (Joel) DeFord, Kent (Karen) Weiss, Elroy Weiss, and Roxanne (Trent) Doerksen; his grandchildren: Josiah, Nicole, Sarah, Derek, David, Rachel, Mary, Abigail, Anne, and Ava; his great-grandson, Benjamin; and two sisters, Mabel Riemer and Rose Fried. He was predeceased by a brother, Allan in childhood; his parents, John and Minnie Weiss; his wife, Ella (Zeitner) Weiss – mother of Brenda, Kent and Elroy; his brother, Harold Weiss; and his sister, Pearl Faszer.

Roy was born in Hilda, attended elementary school in Hilda and Olds, and high school at Prairie High School in Three Hills where he developed an interest in missions. He then attended Bible School at CTI in Edmonton. Next to his love for Jesus was his love for his family and people in general. Roy was gracious, kind and frugal, but generous. He worked at South Country Village from 1967 in management and later was on the Board of Directors until the present. Roy went on seven mission trips with Campus Crusade showing the “Jesus Film” in Brazil, Cameroon, Africa and Mexico. Roy and Gloria also volunteered at the Banso Baptist Hospital in Cameroon for almost a year. He was a charter member of Temple Baptist Church where he served in many capacities. Gideons International in Canada was another area of service as well as weekly visits to the Medicine Hat Remand Center from its opening until 2016. Roy also enjoyed time spent working at Prairie Gleaners.

Thanks to South Country Village for their excellent loving care for Roy during his final days.

Those wishing to pay their respects may do so at SAAMIS MEMORIAL FUNERAL CHAPEL, #1 Dunmore Road SE, on Thursday from 7:00 to 9:00 p.m. The Funeral Service will be held at TEMPLE BAPTIST CHURCH, 606 – 7 Street SW, on Friday, January 6, 2016 at 1:30 p.m. with Reverend Bob Findley officiating. In lieu of flowers memorial gifts in Roy’s memory may be made to Gideons International in Canada, 501 Imperial Road North, Guelph, Ontario, N1H 6T9, or to the Prairie Gleaners Society, Box 656, Medicine Hat, Alberta, T1A 7G6, or to South Country Village, 1720 Bell Street SW, Medicine Hat, Alberta, T1A 5G1. Condolences may be sent through www.saamis.com or to condolences@saamis.com subject heading Roy Weiss. Funeral arrangements are entrusted to