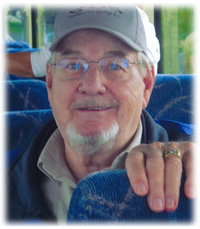 Wayne Philip Olenick passed away at the Medicine Hat Regional Hospital on Friday, December 30, 2016, at the age of 78 years. He leaves to cherish his memory his partner of 30 years, Carol Farr; son, Dean (Maria) Olenick; Carol’s children, Leslie (Al) Kinghorn and Brett (Val Carlson) Farr; five grandchildren, Jericho, Connor and Joshua Olenick, Ryan Olenick, Tera (Eligh) Olenick Ware and Mia Kinghorn; two great- grandchildren, Michael Olenick and Noah Olenick; sister, Audrey Johnston; nephew, Andy Johnston and niece, Stephanie (Kyle) Robertson. He was predeceased by his parents, Philip and Helga Olenick; son, Terry Olenick and a brother-in-law, Jack Johnston. Wayne was born April 9, 1938 in Moose Jaw, Saskatchewan. He started working at a young age with the CPR and later obtained certification as a journeyman welder. He worked in many areas in Western Canada as a welder and later as an oilfield consultant, retiring in 2006. When Wayne wasn’t working away from home he liked to paint and take over the kitchen, baking. He loved to have the grandchildren visit in the summer and loved to camp, especially at the Cabri Regional Park. After retirement, Wayne and Carol spent a few years in their fifth wheel at Tapadera, B.C., where they enjoyed visits with family and made new friends. The last few years they rented in North Vancouver, B.C. for a few weeks in the winter. Wayne continued to paint and took up woodcarving and looked forward to hunting gophers (underground beaver) with his friend, Mel in the summer, and watch curling on TV in the winter. Wayne was a people person, always fun to be with and there was never a dull moment with him. He was very appreciative of his family and friends and at the end, his caregivers in the hospital and he never failed to let everyone know it. A Celebration of Wayne’s life will be held at Cook Southland Funeral Chapel, 901 – 13 Street S.W., Medicine Hat on Friday, January 6, 2017, at 2:00 p.m. with Life Celebrant Gerry Getz officiating. (Condolences may be expressed by visiting our website at www.cooksouthland.com) Memorial donations in Wayne’s name may be made directly to the Cabri Regional Park, P.O. Box 494, Cabri, Saskatchewan, S0N 0J0 or to the charity of one’s choice. Honoured to serve the family is