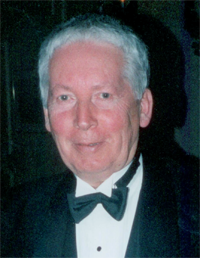 Enveloped by the love of his family, a gentleman, a gentle man and a man of integrity, John passed away peacefully.

Jack graduated from University of Alberta in 1953. He started his lengthy career in the oil and gas regulatory field at the Alberta Oil and Gas Conservation Board. In 1959 the Chairman of the new National Energy Board invited Jack to Ottawa, where he became its first employee. After thirty years of dedicated service he retired as Board Member with an outstanding corporate memory. He then acted as consultant to TransCanada Pipelines and the Canadian Energy Pipeline Association.

He was a long time member of the Rideau Club and the Ottawa Hunt & Golf Club where he served as Curling Captain, championed the inaugural Sweetheart Bonspiel and had the thrill of a hole-in-one. He served as President of the Gloucester Lacrosse Association and the Y’s Friday Luncheon Discussion Club. In retirement he found a new addictive interest, genealogy, handing on 10 years of research.

His family gives heartfelt thanks to Orquidea Levesque, whose devotion fulfilled Jack’s wish to remain at home over the past year.

In honour of her Poppa’s fifteen years of living with Parkinson’s, Amy will run two half marathons in Honolulu to raise funds for the Michael J.Fox Foundation. If you wish to make a donation, please visit https://fundraise. michaeljfox.org/johnjenkins