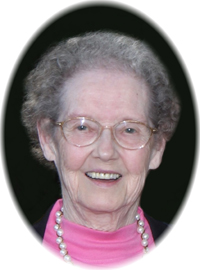 Joyce Frances McCune of Brooks, beloved wife of Dr. Cameron McCune, passed away in Brooks on Saturday, December 31st, 2016 at the age of 93 years. Joyce was born in Cavendish, Alberta on November 15th, 1923 to Ray and Mabel Plowman. Her father worked for the Canadian Pacific Railway so they lived in many places; Monarch, Saskatchewan, Cavendish, Dalroy, Shackleton, Cantaur and Bassano, to name a few. When Joyce was 14 they moved to Empress, Alberta where she met Cam McCune. They were married on August 6th, 1944 in Drumheller, Alberta. They first lived in Calgary where she worked briefly as a secretary, until their first child was born and Cam was honourably discharged from the Canadian Military, Dental Corp. In January 1946 they moved to Edmonton where Cam went to University to obtain his DDS and their second child was born. The family of four then moved to Brooks where Cam established his dental practice and six more children were born. Joyce was very active in the United Church Choir for over 50 years, she also belonged to a sorority, The Mary Ellis Singers and played bridge with many friends. Music was the mainstay in the home as Joyce was very talented on the piano. She also became very involved with genealogy and helped establish the Brooks Genealogy Society and became the family historian. Her biggest joy was her family and her many close friends. Joyce was predeceased by her parents, two sisters, Edna Holland and Edith Knowles and niece Wendy Rackham. She is survived by her loving husand, Cam; children, Kit Spence and her husband Mel, Judy Webber and her husband Jim, Marilyn McCune, Kelley McCune, Ed McCune and his wife Toni, Dorrie McLeod and her husband Doug, Melanie McCune, Amy McCune; 7 grandchildren and 7 great grandchildren. Funeral services will be held on Monday, January 9th at 11:00 AM from Brooks United Church. Rev. Esther Baerends officiating. Interment to follow at Brooks Cemetery. In memory of Joyce, if friends desire, memorial tributes may be made to the Brooks and District Health Foundation for Dementia, Bag 300, Brooks, Alberta T1R 1B3 or Alzheimer’s Society of Alberta, #201, 770 6th Street SW, Medicine Hat, Alberta T1A 4J6.

One Condolence for “McCUNE”