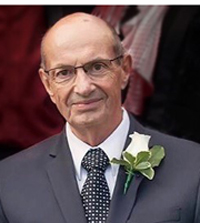 With his family by his side, Alan David Johnson, was taken to his heavenly home on the evening of January 6, 2017.

Alan is predeceased by his parents, John and Anna Johnson; his brother, Gordon Johnson; and his granddaughter, Kylie Dosko.

Alan retired at the age of 63, after a 25-year career with the Coop Oil Refinery in Regina, Saskatchewan. In 2014, Alan and Glenda moved to Medicine Hat, Alberta and purchased their retirement home.

Alan’s greatest joys in life were his family, the gospel, and serving in the church. He was always there to help anyone in need and has touched the lives of numerous individuals with his humble service.

He took great pride in his gardening and loved to share the fruits of his labours with those around him. His family never left his house empty handed. He also enjoyed preparing feasts for his family and friends and will always be remembered for his famous fried chicken and fantastic holiday dinners.

Alan will be greatly missed by all who knew him, especially his family and friends. His family takes great comfort in knowing that they will one day be reunited with him, and until that day, he will be watching over them. Those wishing to pay their respects may do so at SAAMIS MEMORIAL FUNERAL CHAPEL, #1 Dunmore Road SE, on Monday from 7:00 to 9:00 p.m. and at THE CHURCH OF JESUS CHRIST OF LATTER-DAY SAINTS, 7 Sierra Boulevard SW, on Tuesday from 1:00 to 1:55 p.m. The Funeral Service will be held at THE CHURCH OF JESUS CHRIST OF LATTER-DAY SAINTS, on Tuesday, January 10, 2017 at 2:00 p.m. with Bishop Bryan Heninger conducting. Interment will follow at Saamis Prairie View Cemetery. Memorial gifts in Alan’s memory may be made to St. Joseph’s Home, 156 – 3rd Street NE, Medicine Hat, Alberta, T1A 5M1. Condolences may be sent through www.saamis.com or to condolences@saamis.com subject heading Alan Johnson. Funeral arrangements are entrusted to