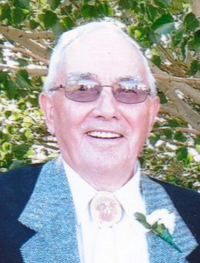 Neil Armstrong Slimmon, beloved husband of the late Ethel Slimmon, passed away peacefully at home near Etzikom on Thursday, January 5, 2017 at the age of 86 years.

The Funeral Service will be held at the Etzikom Community Hall, Etzikom on Wednesday, January 11, 2017 at 2:00 P.M. Burial to follow at the Etzikom Cemetery. Condolences may be forwarded by visiting our website at www.southlandfuneral.com.

Neil is lovingly remembered by his two daughters Carol (David) Lee, Shelly (Doug) Phillips and son-in-law Tom (Glenda) Lee all of the Etzikom area. His loving grandchildren Corrie (Corey) Welling; Brenda Lee and her children Rylee (Nick Belland) Heller and Kasey (Wade Sturtevant) Heller; Robert (Jenny) Lee and their children Jace and Cheyenne Lee; Shannon, Cole and Kourtney Pozdnekoff. He is also survived by his sister Elaine Dale of Winnipeg, Manitoba, sister-in-law Lillian Slimmon of Shoal Lake, Manitoba, brother-in-law Harold (Laura) Wesley of Lethbridge and sister-in-law Joyce Wesley of Calgary. He also leaves to cherish his memory his many special nieces and nephews and cousins in Alberta and Manitoba, he loved them all.

Neil was born on June 26, 1930 in the Municipality of Byrtle Manitoba, son of James and Elsie Slimmon. He grew up on the family farm with five brothers and two sisters. Neil came to Alberta in the spring of 1949 and began working in the Wrentham Area. He married Ethel May Wesley on June 26, 1950. In 1958, Neil started as an Elevator Manager for Searle Grain. His first elevator was in Craigmyle, Alberta, moving to Etzikom in 1962 as Elevator Manager for Searle Grain (later known as Alberta Wheat Pool), a very successful career that spanned more than thirty years. Neil and Ethel also purchased a farm in 1974, which they both loved very much. They worked together in the elevator and on the farm. They retired to the farm in 1992. Neil was never one to sit still for too long. He always needed something to do. After they sold the farm and Ethel passed away in 2008, he needed something to do. He started helping his friends at the Mayfield Colony and helped them right up until his passing. He loved helping them run tractor, build, move machinery, butcher, anything, he enjoyed their company and was Uncle Neil to most on the colony. He also worked as a relief rural delivery driver for Alison Jetter during recent years, something he loved to do as well.

Neil made lifelong friends wherever he went. He made friends with people of all ages. He was a very strong, caring, helpful man. He would do anything for anyone.

Neil was so honoured and deeply touched by his family and friends who surprised him with a party on his eighty sixth birthday. It was a very special day for him.

His family was everything to him. He was always there for help and support, no matter what, right up to his last days. He made a big turkey dinner on New Years Day 2017 for his family at his home.

Dad’s passing has left a huge hole in our hearts and lives. He will be dearly missed by his family and all who knew him.

If friends so desire, memorial tributes in Neil’s name may be made directly to the Bow Island and District Health Foundation, c/o Bag 3990, Bow Island, Alberta T0K 0G0.