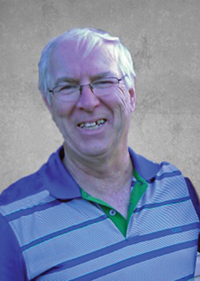 The family of George “Allen” Larter are deeply saddened by his sudden passing on Saturday, January 7th, 2017 at the age of 64 years. Allen leaves to cherish his memory his loving wife, Sherry; his daughters, Amy (fiancé, Lucas Johnson) and Ashley; his faithful dog, Boomer; his brother, John (Faye); his sisters, Mary (Lester) Fall, Audrey (Lawrence) MacDonald and Brenda (Jerry) Greensmith; his sisters-in-law, Marle (Rick) Roberts, Susan (Blair) Schlachter and Karen (Richard) Webster; as well as many nieces, nephews and friends. Allen was predeceased by his parents, Vernon and Georgina; his father-in-law and mother-in-law, Ted and Mida Bosley; his sister, Verna Wood; his brothers, Fred, Harry, David and Blair. Allen was born on March 19th, 1952 in Charlottetown, PEI. In 1981 he moved to Medicine Hat, where he was employed with the City of Medicine Hat until his retirement in 2012. Allen was a gentle person, who’s constant love and devotion and friendship was endless. He was our strength and role model to what a husband, father and friend should be. The Funeral Service will be held at SAAMIS MEMORIAL FUNERAL CHAPEL, 1 Dunmore Road SE, on Thursday, January 12th, 2017 at 1:30 p.m. with Gary W. Goran officiating. In lieu of flowers, memorial gifts may be made to the Alberta Heart & Stroke Foundation, 124, 430 – 6th Avenue SE, Medicine Hat, Alberta, T1A 2S8 or to the S.P.C.A., 55 Southwest Drive SW, Medicine Hat, Alberta, T1A 8E8. Condolences may be sent through www.saamis.com or to condolences@saamis.com subject heading Allen Larter. Funeral arrangements are entrusted to SAAMIS MEMORIAL FUNERAL CHAPEL CREMATORIUM & RECEPTION CENTRE, “The Chapel in the Park” #1 Dunmore Road SE, Medicine Hat, AB T1A 1Z5 (403)528-2599 www.saamis.com inquiry@saamis.com Locally owned and directed CGR Holdings Ltd.