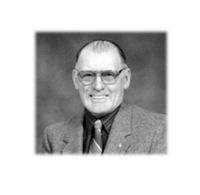 1917 – 2017
Albert, beloved husband of Therese Goulet, was called to be with his Lord and Saviour on January 7, 2017, at the age of 99 years. He was born on June 14, 1917, in Dollard, Saskatchewan and was the last survivor of his family of six: his parents Alcide and Albertine Dufresne, two brothers, Damien and Tony as well as a sister, Luciene. He and his wife Therese were happily married for almost 68 years, raising three loving children. Albert worked in a general store and post office in Lisieux, Saskatchewan from 1937 to 1942 and spent the succeeding seven years as a grain buyer and bulk fuel dealer in Dollard. In 1949, he began working at a base metal mine in Kimberley, British Columbia, then in the Dollard Hotel for a short time before leaving there in 1953 to work in the Dollard Oil Field for the Marathon Group as roustabout and pumper. From 1962 to 1967, he was a production supervisor. Much of his spare time he served as a Councillor of Dollard (seven years) and on the Shaunavon Town Council (two years). Albert was a proud member of the knights of Columbus for over 60 years. He spent many years at the Valleyview in Medicine Hat with his wife Therese and the last 9 years of his life at Columbia Assisted Living, Lethbridge, Alberta. When he turned 99, he moved to Park Meadows Village in Lethbridge. Albert is survived by his son, Gerald (Elaine) Dufresne of Calgary; grandson, Denis and great-grandson, Jochanan of Calgary; granddaughter, Rachelle (Darren deceased) Milton of Medicine Hat and great-grandchildren, Dylan and Jordan; daughter, Adele (Nick deceased) Zbrodoff of Lethbridge; granddaughter, Tracy (Kam) Bullock of Lethbridge and great-grandchildren, Brittany and Kylie; grandson, Scott Zbrodoff of Calgary; son, Gilbert (Wendy) Dufresne of Brooks, and grandson, Jeremy of Edmonton. He is also survived by two sisters-in-law, Beatrice Goulet, and Armande Goulet; one brother-in-law, George Allen as well as several nieces and nephews. He was fortunate to have many close brothers-in-law and sisters-in-law, 13 throughout his life. Albert liked fishing, curling, golfing and boating. He truly loved life and especially his family and friends. He was a loving husband, father, son, brother, uncle and grandfather and will be sadly missed. The Funeral Service will be held at Cook Southland Funeral Chapel, 901 – 13 Street S.W., Medicine Hat on Friday, January 13, 2017, at 11:00 AM. with Reverend Father Philip Le officiating. A time of fellowship and refreshments will follow thereafter in the Cook Southland Reception Facility. (Condolences may be expressed by visiting our website at www.cooksouthland.com) If friends so desire, memorial tributes may be made to the Heart and Stroke Foundation of Alberta, 124, 430 – 6 Avenue S.E., Medicine Hat, Alberta, T1A 2S8. Honoured to serve the family is Cook Southland Funeral Chapel, 901 – 13th Street S.W. Medicine Hat, Alberta T1A 4V4 Phone 403-527-6455