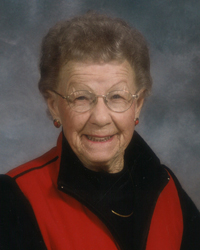 Alma Matilda Smith passed away in Medicine Hat on Sunday, January 8th, 2017 at the age of 98 years. She is survived by two daughters, Vicky-Lynn (Rick) Krause and Joanne (Darrell) Hodges, both of Medicine Hat; grandchildren, Tyler (Sarai), Chad (Lizzie), Amy and Daniel; one brother, Otto Hoffman of Medicine Hat; two sisters, Martha Carlyle of Calgary and Clara (Ian) McGill of Ottawa; one sister-in-law, Helen Smith of Brooks; as well as numerous nieces, nephews, neighbors and friends. Alma was predeceased by her parents, Mary and Theodore Hoffman; her husband, Cecil Smith; four brothers, Emil, Walter, Albert and Ernie; and two sisters, Hilda Weir and Mary Schwabe. Alma was born on May 8th, 1918 in Medicine Hat where she was raised. She attended public school and worked at Gusts Food Store, Medalta Potteries and the Royal Bank. On July 18th, 1953, she married Cecil Smith of Whitla and this city girl moved to the farm north of Whitla. Cecil and Alma were a farm family very involved in the Whitla community for 25 years. They sold the farm in 1978 and retired to Medicine Hat where Alma once again returned to be a city girl. In 1993, after Cecil’s passing, Alma moved to Horizon Village where she made many friends, and thoroughly loved being involved in all the social events. For the last four and a half years, Alma lived at the Wellington where she made more new friends and enjoyed all the activities offered to the residents. Alma was a devout life-time member of St. Peter Lutheran Church, serving in various roles and participating in the church her whole life. She was very much a people-person who enjoyed visiting with her many family and friends. The Funeral Service will be held at ST. PETER LUTHERAN CHURCH, 758 – 8th Street SE, on Friday, January 13th, 2017 at 1:00 p.m. with Pastor Shane Hein officiating. A private interment will follow at Hillside Cemetery. Memorial gifts in Alma’s memory may be made to the St. Peter Lutheran Church Memorial Fund, 758 – 8th Street SE, Medicine Hat, Alberta, T1A 1M5. Condolences may be sent through www.saamis.com or to condolences@saamis.com subject heading Alma Smith. Funeral arrangements are entrusted to