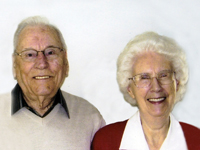 Peter was born in Wantage, Oxfordshire, England and is predeceased by his parents Henry and Catharine and his brothers Eric (Phyllis) and Ron (Edna). He is survived by his sister Pamela of Southhampton, England.

Olive was born in Worral Hill, Forest Of Dean, Gloucestershire, England and is predeceased by her parents Colonel and Rose and her brother Gordon (Bobbie).

Olive emigrated to Canada with her parents and brother in 1929, settling in Medicine Hat, Alberta. Peter was posted to Canada in the Royal Air Force in 1942 and married Olive on December 24th of that year. They returned to England while Peter served as an Aircraftsman in several R.A.F. postings, including Egypt. They eventually returned to Canada in 1949. Peter worked as the Personnel Officer for the City of Medicine Hat, Alberta from 1950 to his retirement. Olive devoted herself to raising a family, became involved in the Girl Guide movement and church groups, and knitted innumerable garments for family and donations. They subsequently moved to Victoria then Chilliwack, BC, finally settling in Cranbrook, BC in 2002. Over the years Peter and Olive shared a mutual love of league bowling, carpet bowling, ballroom dancing, jigsaw puzzles and books. They just celebrated their 74th wedding anniversary.

Peter and Olive were a glorious example of perseverance, strength and partnership, and passed away as they had lived….together.

In lieu of flowers, a donation can be made in their name to the: East Kootenay Regional Hospital, 3rd Floor, 13 – 24th Avenue North, Cranbrook, British Columbia, V1C 3H9.

A family memorial service will be held at a later date.

Arrangements entrusted to McPherson Funeral Service. Condolences for the family can be offered at: www.mcphersonfh.com