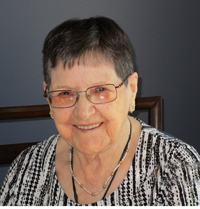 Dorothy Louise Sulz of Medicine Hat, beloved wife of the late Alfred Sulz, passed away on Thursday, January 12th, 2017 at the age of 89 years. Dorothy leaves to cherish her memory two sons, David (Anne) Sulz of Coaldale and Gord (Lisa) Sulz of Redcliff; one daughter, Jane (Terry) Kowalawski of Medicine Hat; three grandchildren, Tim Sulz (Darbie Dechaine) of Redcliff, Stephanie Mew and Jennifer Mew, both of Medicine Hat; one brother, Brian Jones of Medicine Hat; one sister, Jean Dahl of Kindersley, Saskatchewan; as well as numerous nieces and nephews. Dorothy was predeceased by her husband, Alf; one daughter, Debbie Sulz; one grandson, Thomas Sulz; her parents, Meredith and Elsie Jones; one brother, Gordon Jones; one sister, Margaret Paynter; as well as numerous brothers-in-law and sisters-in-law. Dorothy was born on December 5th, 1927 near Eatonia, Saskatchewan where she was also raised, educated and met Alf. They were married on October 25th, 1951 in Saskatoon. In 1955 they made Medicine Hat their home. In order to be close to and raise her family she started a child care facility in her home. All the children she cared for were very special and many still refer to her as Nanny. In 1977 Alf and she purchased the House of Pets and operated it until 1994 when Dorothy decided to officially retire. Her passions, besides her family, were gardening, painting pictures, doing jigsaw and crossword puzzles as well as reading. Those wishing to pay their respects may do so at SAAMIS MEMORIAL FUNERAL CHAPEL, 1 Dunmore Road SE, on Monday from 7:00 until 9:00 p.m. The Funeral Service will be held at SAAMIS MEMORIAL FUNERAL CHAPEL, on Tuesday, January 17th, 2017 at 3:00 p.m. with Dr. Shane P. Andrus officiating. Interment will follow in the Field of Honour Section at Hillside Cemetery. Memorial gifts in Dorothy’s memory may be made to the Margery E. Yuill Cancer Centre or the Palliative Care Unit, both c/o Medicine Hat and District Health Foundation, 666 – 5th Street SW, Medicine Hat, Alberta, T1A 4H6. Condolences may be sent through www.saamis.com or to condolences@saamis.com subject heading Dorothy Sulz. Funeral arrangements are entrusted to