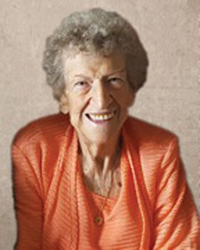 Audrey Helena (Clark) McElligott (nee Brown), passed away peacefully on Tuesday, January 17th, 2017 at the age of 93 years in Medicine Hat, Alberta after a period of failing health. Audrey was born in Saint John, New Brunswick to Shirley Leroy Brown and Gertrude Elizabeth Leeman. She was the last surviving member of her immediate family and was predeceased by siblings, James, Muriel, Trueman, Douglas, Kenneth and Gertrude. She was also predeceased by her husband, William McElligott; and son, Larry Wayne Clark. She is survived by her daughter-in-law, Maggie Ross of London, England; daughter, Barbara (Ric) O’Neill; two granddaughters; and one great granddaughter, all of Calgary; step- children, Elizabeth McElligott of Vancouver, Douglas (Betty) McElligott of Calgary; and step-granddaughter, Dawn McElligott of Calgary; as well as numerous nieces and nephews including, special niece, Bonnie Furyk of Barrie, Ontario. Audrey was blessed to have the companionship and help of many friends and caregivers in her life. Very special thanks to nephew, Ted Brown and wife Ann of Penticton, British Columbia who lovingly helped Audrey in her later years and helped care for her in her last weeks of failing health.
Audrey entered the Canadian Women’s Army Corps in 1942 and was discharged with the rank of Sergeant in 1946. She spent most of her working life in Montreal, Quebec. She and Bill moved to Medicine Hat in 1980 where they made many friends and became involved in activities such as golf, bowling and square dancing. Audrey was a long-time member of the Hat Harmonettes and was awarded a Honourary lifetime membership in 2014. She volunteered for many years as a receptionist at the Veiner Centre for which she received numerous certificates of appreciation including the Golden Hero award.
Audrey was a private person, loving and kind who always enjoyed a good laugh. Her character was peppered, always with a sense of mystery. She will be missed. There will be no service at Audrey’s request. Her ashes will be interred in the family plot in Saint John, New Brunswick. Memorial gifts in Audrey’s memory may be made to the SPCA, 55 Southwest Drive SW, Medicine Hat, Alberta, T1A 8E8 or to a charity of one’s choice. Condolences may be sent through www.saamis.com or to condolences@saamis.com subject heading Audrey McElligott. Funeral arrangements are entrusted to SAAMIS MEMORIAL FUNERAL CHAPEL CREMATORIUM & RECEPTION CENTRE, “The Chapel in the Park” #1 Dunmore Road SE, Medicine Hat, AB T1A 1Z5 (403)528-2599 www.saamis.com inquiry@saamis.com Locally owned and directed CGR Holdings Ltd.