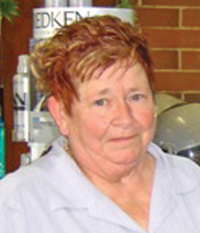 Faye Fuhrmann, beloved wife of Erich Fuhrmann, passed away peacefully with her family by her side on Thursday, January 19th, 2017. She leaves to cherish her memory three children, Joanne Fuhrmann (Ken Wright) of Medicine Hat, Kevin Fuhrmann (Hayley Poberznick) of Medicine Hat, and Krista (Joey) Pettyjohn of Redcliff; five grandchildren, Hope, Riley, Camrynn, Jordyn, and Payton; two brothers, Dwight (Betty-Anne) Selke and Kurt (Norma) Selke; a sister-in-law, Betty Fuhrmann; as well as numerous nieces and nephews. Faye was predeceased by her parents, Kurt and Dorothy Selke; and her brother, Gerald Selke. Faye was born in Wawota, Saskatchewan and grew up on the family farm near Maier, Saskatchewan. During Faye’s high school years, she held the provincial shot put record. She later met the love of her life, Erich, in 1963 and was married in August of 1964 in Carlyle, Saskatchewan. They went on to start their family in Estevan, Saskatchewan and moved to Redcliff, Alberta in 1974. Faye played a huge role in each of her children’s lives. She was everything from a hockey mom, president of the Redcliff Figure Skating Club, and a baseball coach. Her door was always open to anyone and everyone. More recently she loved to spend countless hours with her granddaughters. The Funeral Service will be held at SAAMIS MEMORIAL FUNERAL CHAPEL, #1 Dunmore Road SE, on Friday, January 27th, 2017 at 2:00 p.m. with Diaconal Minister Lila DeWaal and Pastor Mac DeWaal, co-officiating. Memorial gifts in Faye’s memory may be made to Save Old Souls, Box 272, Redcliff, Alberta, T0J 2P0. Condolences may be sent through www.saamis.com or to condolences@saamis.com subject heading Faye Fuhrmann. Funeral arrangements are entrusted to