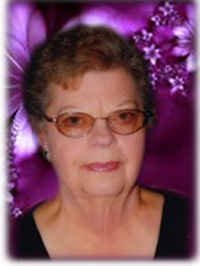 Mrs. Florence Doreen Juhas, beloved wife of the late Steve Juhas, passed away at the Medicine Hat Regional Hospital on Monday, January 23, 2017, at the age of 79 years. Doreen’s memory will be forever cherished in the hearts of her three children; Robert Kindred and his daughter, Migon; Terri (Denis) Jackson and their son, Alex; Laurie Baron and her children, Brittney and Nicole; great-grandson, Liam Baron; granddaughter, Coralee and her daughter, Audrey; sister, Elaine Derrickson and brother, Ken (Marg) Reynolds; special friend, Joe Greenstein as well as numerous nieces and nephews. Doreen was predeceased by her husband, Steve; parents, Pete and Edna; son, Alan Kindred; sister, Pearl Unser and granddaughter, Ashley Baron. Doreen loved music, scrapbooking and going for coffee with friends. She loved spending time with family, especially her grandchildren who were very important to her. A private family service will be held. (Condolences may be expressed by visiting our website at www.cooksouthland.com) Honoured to serve the family is