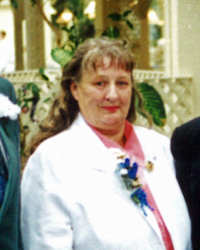 Mary “Kathleen” Ann Madsen of Medicine Hat, beloved wife of the late Eric Madsen, passed away on Tuesday, February 7th, 2017 at the age of 79 years. Kathleen leaves to cherish her memory five sons, Kenneth (Amanda) Madsen, Calvin (Jayne) Madsen, Clayton (Donna) Madsen, Cameron (Lynne) Madsen and Kent Madsen; two daughters, Laura (Dave) Verigan and Shannon Hunter; fifteen grandchildren; eight great grandchildren; as well as four nieces and nephews. Kathleen was predeceased by her husband, Eric; her parents, Augustive and Marion Holt; and one sister, Carol Tuchscherer. Kathleen was born on October 26th, 1937 in Cabri, Saskatchewan. She was raised in Abbey, Saskatchewan before moving to Drayton Valley, Alberta and Medicine Hat. Kathleen loved to visit with her family and some of her favorite times were when her family joined her for Christmas. The family would like to thank the 3rd Floor Staff at Points West Living in Red Deer, the nurses at the Red Deer Regional Hospital, Anne and Jay for their wonderful care of Kathleen. Those wishing to pay their respects may do so at SAAMIS MEMORIAL FUNERAL CHAPEL, 1 Dunmore Road SE, on Monday, February 13th, 2017 from 10:00 a.m. to 1:55 p.m. The Funeral Service will be held at SAAMIS MEMORIAL FUNERAL CHAPEL on Monday, February 13th, 2017 at 2:00 p.m. with Gary W. Goran officiating. Interment will follow at Hillside Cemetery. Memorial gifts in Kathleen’s memory may be made to the S.P.C.A., 55 Southwest Drive SW, Medicine Hat, Alberta, T1A 8E8. Condolences may be sent through www.saamis.com or to condolences@saamis.com subject heading Kathleen Madsen. Funeral arrangements are entrusted to SAAMIS MEMORIAL FUNERAL CHAPEL CREMATORIUM & RECEPTION CENTRE, “The Chapel in the Park” #1 Dunmore Road SE, Medicine Hat, AB T1A 1Z5 (403)528-2599 www.saamis.com inquiry@saamis.com Locally owned and directed CGR Holdings Ltd.