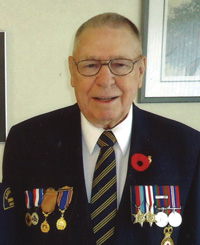 September 1, 1925 ~ February 6, 2017
Howard Richard Osgood of Redcliff, passed away on Monday, February 6, 2017 at the age of 91 years. Howard leaves to cherish his memory two sisters, Norma Sharpe of Edmonton and Velma Pancoast of Medicine Hat; one brother, Kaye Osgood of Redcliff; as well as numerous nieces and nephews. He was predeceased by his parents, Alfred and Viola Osgood; and one brother, Gordon, all of Redcliff. Howard was born and raised in Redcliff. He joined the military on February 28, 1944 and was discharged on April 27, 1946 having served in with the Royal Highland Fusiliers of Canada as a private and served overseas in WWII. Upon returning from the War, he worked in numerous places and spent the last 15 years as foreman with the CNR in Edmonton. Howard was an active member of the Redcliff Royal Canadian Legion, Branch #6 for 70 years, the Redcliff Senior Citizens and a Life Member of the Masonic Lodge. He enjoyed and participated in many sports activities and he always enjoyed a good game of cards. Howard was known for his keen memory and great sense of humour. The Funeral Service will be held at CHINOOK VILLAGE, Terrace Room, 2801 – 13 Avenue SE, on Saturday, February 11, 2017 at 1:00 p.m. with Pastor George Brandt officiating. Interment will follow at Redcliff Cemetery. Memorial gifts in Howard’s memory may be made to the Salvation Army, 164 Stratton Way SE, Medicine Hat, Alberta, T1B 3R3. Condolences may be sent through www.saamis.com or to condolences@saamis.com subject heading Howard Osgood. Funeral arrangements are entrusted to
SAAMIS MEMORIAL FUNERAL CHAPEL CREMATORIUM & RECEPTION CENTRE, “The Chapel in the Park” #1 Dunmore Road SE, Medicine Hat, AB T1A 1Z5 (403)528-2599 www.saamis.com inquiry@saamis.com Locally owned and directed CGR Holdings Ltd.