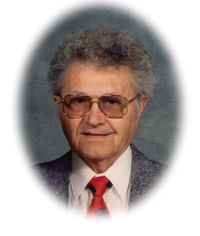 Andrew “Andy” Peter Roth of Medicine Hat, beloved husband of the late Anne Roth, passed away on Sunday, March 26th, 2017 at the age of 96 years. Andy leaves to cherish his memory two daughters, Deborah (Robert) Townsend and Pam (Medhat) Salem; one brother, Peter Roth; one sister, Josephine (John) Holton; special friend, Margaret Loran; two sisters-in-law, Mary Roth and Enge Kessler; as well as numerous nieces and nephews. Andy was predeceased by his wife, Anne; his parents, Joseph and Elizabeth Roth; one daughter in infancy; two brothers, Jack Roth and George Roth; and five sisters, Margaret, Anna, Barbara, Magdelina and Sister Elizabeth Roth. Andy was born on May 9th, 1920 in Bow Island and was raised and educated south of Bow Island. He joined and served with the Canadian Army from 1940 until 1946. Andy met and married Anne on October 12th, 1948 at St. Anthony’s Church in Granlea, Alberta. Together they farmed south of Bow Island from 1948 until 1973. They retired to Bow Island in 1973 before moving to Medicine Hat in 1993. Andy’s faith was very important to him. He was a member of the Knights of Columbus and enjoyed woodworking, crafts, gardening, vacations, cruises and the company of his family and friends who will miss him dearly. Vigil Rites (Prayers) will be held at SAAMIS MEMORIAL FUNERAL CHAPEL, 1 Dunmore Road SE. on Wednesday at 7:00 p.m. The Funeral Mass will be celebrated at HOLY FAMILY PARISH, 1451 Strachan Road SE, on Thursday, March 30th, 2017 at 11:00 a.m. with Father Philip Le, Celebrant. A private interment will follow in the Roman Catholic Section at Hillside Cemetery. Memorial gifts in Andy’s memory may be made to the Alzheimer Society, 201, 770 – 6th Street SW. Medicine Hat, AB, T1A 4J6. Condolences may be sent through www.saamis.com or to condolences@saamis.com subject heading Andy. Funeral arrangements are entrusted to
SAAMIS MEMORIAL FUNERAL CHAPEL CREMATORIUM & RECEPTION CENTRE, “The Chapel in the Park” #1 Dunmore Road SE, Medicine Hat, AB T1A 1Z5 (403)528-2599 www.saamis.com inquiry@saamis.com Locally owned and directed CGR Holdings Ltd.