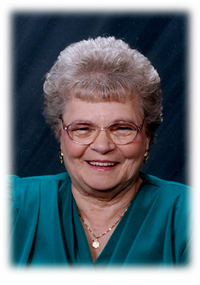 July 16, 1921 – March 17, 2017
Mrs. Mary Wesolowski passed away peacefully on Friday, March 17, 2017 at the Good Samaritan Society, at the age of 95 years. Her memory will be treasured in the hearts of her brothers, Paul, Mike; and sister, Helen as well as her grandchildren. Mary was predeceased by her first husband, Joseph Wesolowski and her second husband, Walter Moxness; her three sons, Ernie (2000), Myles (2007) and Greg (2010); parents, Mike and Frances Shewchuk; her sisters, Stephanie, Ann, Eleanor and brothers, John and Leonard. Mary was a devoted and loving mother all her life and prayed for her boys up to her last days. The Funeral Mass will be celebrated on Friday, March 31, 2017 at 1:00 p.m., at Christ The King Roman Catholic Parish, 580 – 5 Street East, Shaunavon, SK., with Reverend Father John Mock celebrant. Interment to follow in the family plot at St. Mary’s Roman Catholic Cemetery, Shaunavon, SK. If friends so desire, memorial donations in Mary’s name may be made directly to the Alberta Heart &â€ˆStroke Foundation, #124, 430 – 6 Avenue S.E., Medicine Hat, Alberta T1A 2S8. (Condolences may be expressed by visiting www.cooksouthland.com) Honoured to serve the family is
Cook Southland Funeral Chapel, 901 – 13th Street S.W. Medicine Hat, Alberta T1A 4V4 Phone 403-527-6455