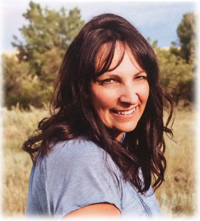 “I can do all things through him who give me strength” Philippans 4:13

Karen’s earthly journey ended on Wednesday, April 12, 2017, at the age of 48 years at the Medicine Hat Regional Hospital, following a 14 month battle with ALS that she fought with courage and strength. Karen’s journey into eternity started that same day, leaving her corrupt and broken body that failed her. She was welcomed in by her Lord and Savior Jesus Christ. It warms our hearts to know as we said good bye to Karen, Jesus followed with: “Well done my good and faithful servant, your reward is waiting for you”. We will not attempt to honor and pay tribute to Karen in this column as it would not do her justice. It is suffice to say that Karen was our rock, the pillar of our house and the corner stone of our family. She was a selfless mother of four boys, always putting them first. Karen leaves behind her beloved husband of nearly 29 years, Rick; sons, Raymond Jackson (23) (Kelsi Van Maarion) to be married, June 3, 2017; Martin James (21), Gerad Jason (19), Kyle Joseph (16) who’s birthday was three days after Karen passed; Karen’s step-mother, Judy Wallace; brothers, David (Donna) Wallace and their son, Russell; Dean (Karen) Wallace and their children, Michelle, Jordan, Brett; special aunt and uncle, Ted (Marj) Gilchrist and their family; father-in-law and mother-in-law, George (Teresa) Vanderhorst; brothers-in-law and sisters-in-law, Angie (Albert) Cramer, Perry (Jen) Wagenaar, Mandy (Ralph) Van Dam and Wanita Wagenaar as well as many special nieces, nephews and extended family. Karen was predeceased by her mother, Donna Wallace in 1980; her father, Glen Wallace in 2006; her uncle, Jim Gilchrist; aunt, Linda Nicholson and father-in-law, Menno Wagenaar in 1980. There are so many family and friends in Karen’s life we would like to thank for helping us through this difficult time, as not to miss anyone; you know who you are… thank you. To my sweetie and our madré… “rest well, we will see you again”. If friends so desire, memorial donations in Karen’s name may be made directly to the ALS Society, #400, 1301 – 8 Street SW., Calgary, AB. T2S 0J2. A Memorial Service honouring Karen’s life will be celebrated at the Christian Reformed Church, 300 Primrose Drive S.E., Medicine Hat, on Tuesday, April 18, 2017, at 2:00 p.m., with Pastor George Koopmans officiating. (Condolences may be expressed by visiting www.cooksouthland.com) Honoured to serve the family is