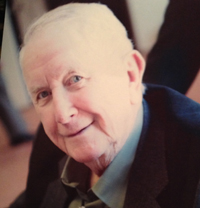 Mr. Albert Wilhelm Anderson, beloved husband of the late Mrs. Ruth Anderson, passed away at St. Mary’s Hospital in Camrose, Alberta on Monday, May 1, 2017, at the age of 98 years. Albert Wilhelm Anderson was born the youngest of four children to Carl Anderson on the homestead in Jenner on September 9, 1918. He left school at Grade 6 to work, driving 12 head of horses on a breaking plow while working for various other ranchers as well. He saved his money, bought some land and started farming with his brother which worked well as they could share equipment. He was introduced to his future wife Ruth by the postmasters Frank and Marg at the post office. She had been hired to be the Principal of Jenner school. Ruth died in a car accident the year after their son Jim was born. Albert farmed in the Jenner district until 1992. He later farmed again with son Jim at Daysland from 1999 to 2007. Albert loved to farm and ranch, crediting ”hard work to sweat the poisons out” as the reason for his long life. He enjoyed the marvels of God’s creations, studying animals and people. Albert enjoyed traveling and the reconnection to his Swedish family: Eskilsson, Karlson and others. He is survived by his son, Jim (Betty) Anderson; 2 nephews, Melvin (Betty) Fieldberg and Arnold (Lorna) Fieldberg; great-nieces, Alison and Marni; nephew, Ken (Millie) Picotte and niece, Gail Picotte. He is also survived by many other nephews and nieces. Albert was predeceased by his wife Ruth, 2 sisters, Lillian and Ellen and one brother, Walter. A Celebration of Albert’s life will be held at Hillside Cemetery on Saturday, May 6, 2017, at 11:00 a.m. Those wishing to attend the service should gather at Cook Southland Funeral Chapel, 901 – 13 Street S.W., Medicine Hat on Saturday between 10:40 a.m. and 10:50 a.m. (Condolences may be expressed by visiting our website at www.cooksouthland.com) Honoured to serve the family is