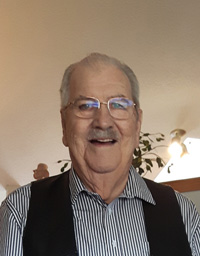 Harold Douglas MacIver, known to many as “Hobo Hal”, passed away on Sunday, May 7th, 2017 at the age of 80 years. Harold leaves to cherish his memory his wife, Florence; four daughters, Anita (Doug) Overs, Sherry MacIver, Dawna (Derrick) Dooley, and Lori (Cal) Isley; three grandchildren, Cole, Joshua, and Maison; as well as numerous relatives and friends. Harold was predeceased by his parents; and his son, Harold “Hal” MacIver. Harold was born and raised in Gillis Cove on Cape Breton Island. He married and had a family before moving to Medicine Hat in February 1994. Harold then met Florence and they were married spending their 20 years together in Redcliff. Harold was a Mason and a Shriner as well as an Elder at St. John’s Presbyterian Church. He was a true Scotsman and an active hunter and fisherman who enjoyed camping. The Funeral Service will be held at ST. JOHN’S PRESBYTERIAN CHURCH, 504 – 2nd Street SE, on Thursday, May 11th, 2017 at 11:00 a.m. with Pastor Bob Cruickshank and Reverend Dr. Nancy Cocks, co-officiating. Those attending the service are asked to bring a Diet Pepsi to toast a farewell to Harold. In lieu of flowers, memorial gifts in Harold’s memory may be made to the Medicine Hat Shrine Club Sneaker Fund. Condolences may be sent through www.saamis.com or to condolences@saamis.com subject heading Harold MacIver. Funeral arrangements are entrusted to
SAAMIS MEMORIAL FUNERAL CHAPEL CREMATORIUM & RECEPTION CENTRE, “The Chapel in the Park” #1 Dunmore Road SE, Medicine Hat, AB T1A 1Z5 (403)528-2599 www.saamis.com inquiry@saamis.com Locally owned and directed CGR Holdings Ltd.