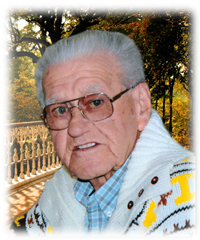 May 9, 1931 – May 7, 2017
Mr. Cecil Luscombe, beloved husband of Mrs. Rose Luscombe, passed away at the Riverview Care Centre on Sunday, May 7, 2017, at the age of 85 years. Cecil will be lovingly remembered by his children, Dwight (Audrey) Luscombe and their children, Sheldon (Rochelle) Luscombe and their children, Carter and Carley; Tannis (Jay) Jans and their children, Cassie, Jace, Ty; Deanna (Tyson) Robinson and their children, Reese and Kayla; Garth (Mary-Anne) Luscombe and their children, Chad (Carrie) Luscombe and their children, Emma, Anna and Jordan; Tyler Luscombe; Kendra (Boyd) Gravel and their children, Kiana, Liam, Jayden; Dale (Debbie) Luscombe and their children, Derek Luscombe and his daughter, Kymara; Dustin (Chelsea) Luscombe and their daughter, Andi; Fay McGregor and her children, Kaylynn (Talon) Starrak and their children, Tenley and Brynn; Braden McGregor; Donna Engel (Doug) and her children, Tiffany (Jaret) Pomeroy and their children, Carson, Kaidence and Austin; Andraes Engel and her son, Kingston; Sheila Olson and her children, Amanda (Jessie) Roberts; Brandon Olson; brothers, Alfred and Bert as well as numerous nieces and nephews. Cecil was predeceased by his wife, Rose; parents, William and Nellie; son-in-law, Jim Olson; great-granddaughter, Abigail Roberts and siblings, Douglas, Ilene, Nelly, Mary, Phylis, Dorothy, Bill, Ray and Art. Cecil was born in Lemberg, SK., on May 9, 1931 and attended Lemberg School. He had eleven siblings and his nickname growing up was “Lucky”. Cecil married Rose Kollmann on April 18, 1952 and together moved to Redcliff to raise their six children. Following the move to Redcliff, he worked on the construction of the Medicine Hat Hospital and the Medicine Hat power plant. He then worked at the Redcliff Dominion Glass Factory for 35 years, retiring from there in 1988. The family attended Gordon Memorial Church where Cecil helped with the maintenance on the church and served for years on the church board. Woodworking was one of his many passions. One of the side tables Cecil built is currently being used at the Riverview Care Centre. Cecil loved reminiscing about his childhood and adventures on the farm. As a young man growing up in Saskatchewan, Cecil was a hired hand to many of the neighboring farms. He enjoyed vacationing with his children and fishing with his friends and family. Cecil was a caring and loving husband to Rose and a role model for his children, grandchildren and great- grandchildren. A Celebration of Cecil’s life will be held at Cook Southland Funeral Chapel, 901 – 13 Street S.W., Medicine Hat on Friday, May 12, 2017, at 1:00 p.m. with Life Celebrant Gerry Getz officiating. Interment will follow at Redcliff Cemetery with a reception thereafter in the Cook Southland Reception Facility. (Condolences may be expressed by visiting our website at www.cooksouthland.com) Honoured to serve the family is Cook Southland Funeral Chapel, 901 – 13th Street S.W. Medicine Hat, Alberta T1A 4V4 Phone 403-527-6455

One Condolence for “CECIL LUSCOMBE”