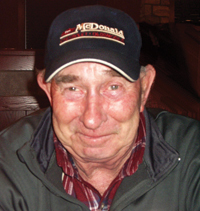 It is with great sadness that we announce the passing of Russell Martin Johnson in Taber on Sunday, June 4, 2017 surrounded by loved ones at the age of 85 years.
The Celebration of Russell’s Life will be held at the Vauxhall Legion, 217 – 5 Street North, Vauxhall on Thursday, June 8, 2017 at 2:00 P.M. Condolences may be forwarded by visiting our website at www.southlandfuneral.com.
Russell is survived by his loving wife of twenty one years, Marlyne who lovingly nicknamed him “Rusty”; his beloved step children Robert Mogck (Damanjeet Kaur) of Medicine Hat and Bonnie (Tim) Baceda of Coaldale along with their son and Russell’s pride and joy his step-grandson Kody. He is also survived by his sister Margaret Randall; nieces Joan (Larry) Holmes and Jennifer (Bryce) Goodman; nephews Stuart Randall and Leonard Randall and their families; sisters-in-law Bea (John) Virostek, Marion Freimuth (Marlyne’s twin), Edna McFall and their families as well as many cousins and their families.
He was predeceased by his parents Olaf and Mary Johnson, brother-in-law Mel Wutch, sister-in-law Alethea Wutch, brother-in-law Albert Freimuth and by numerous other family members.
Russell was born on March 6, 1932 on the family farm in the Circle Hill area. He was the oldest of two children born to Olaf “Ole” and Mary “Mamie” Johnson. Russell lived his whole life on the farm where he was born, except when failing health forced him to move to Linden View Care Facility in Taber. He loved farm life and was so passionate about it that he wanted to do nothing but farm, which he did until his health deterioration forced him into taking the “supervising only” position. He continued taking an active role in the every day operations of the farm. Russell’s other passion was sports. When he wasn’t busy farming, he could be found on the baseball diamond in the summer or the curling rink in the winter. When he wasn’t actively participating in sports, he enjoyed hockey, football, baseball, rodeo events or curling on television. Another of his favorite pass-times was driving the country side checking out all of the crops in the area.
If friends so desire, memorial tributes in Russell’s name may be made directly to the Royal Canadian Legion #93 Vauxhall, P.O Box 125, Vauxhall, Alberta T0K 2K0 or to the Taber and District Health Foundation, 4326 – 50 Avenue, Taber, Alberta T1G 1N9.