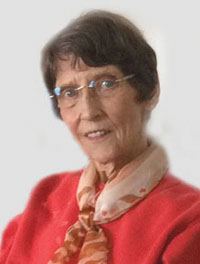 Charlotte Hartley passed away peacefully with her children by her side on June 5, 2017 at the age of 75 years. Her memory will be forever cherished by daughter Susan (Jason) Vincent of Cochrane, Alberta and son Robert (Tavia) Hartley of Calgary, Alberta; Charlotte’s mother Jean Meier and sister Patricia (Daryl) Toma of Willingdon, Alberta and her special friend Ron Dowling of Medicine Hat, Alberta.

Charlotte is a very proud Grandma of five grandchildren. She will be greatly missed by Simon, Logan, and Sam Vincent of Cochrane, Alberta and Livia and Alex Hartley of Calgary, Alberta.

Charlotte was born on October 9, 1941 in Leader, Saskatchewan. She spent the majority of her life working for RBC and nurturing her family in Medicine Hat, Alberta. Charlotte was happy to spend the past 2 years at Big Hill Lodge in Cochrane where she could be closer to her family.

Charlotte will now join those who left before her; infant son Michael Hartley and her father Elmer Meier.

In lieu of flowers, donations may be made to Canadian Liver Foundation www.liver.ca

A Private Memorial Celebration will be taking place in the coming weeks. Charlotte will be laid to rest at the Hillside Cemetery, Medicine Hat, Alberta

Condolences may be left at www.cochranecountryfuneralhome.com. Arrangements in care of Cochrane Country Funeral Home 403-932-1039.