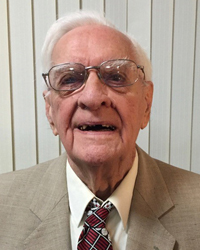 Denis Fredrick Jenkins, loving husband of the late Elsie Jenkins (nee Luyten), passed away quietly on Tuesday, July 11th, 2017 at the age of 95 years. Denis was born in Manchester, England on October 10th, 1921. He was predeceased by his parents; and his brother, Alan of Manchester. He leaves to cherish his memory his nephew, Dave Luyten (Valerie) and children Susanne, Christi, Erin and Jennifer; his niece, Gwen Evjen and children Andrew and Dawnette; his nieces, Carol Herter and Elaine Romeike of Medicine Hat; as well as other nieces and nephews. Denis is also remembered by his sister-in-law, Linda Jenkins and her sons, Adam and Paul, all residing in England. Denis earned his degree from Manchester University in chemical engineering and then served in the Royal Navy during WWII in the Mediterranean Sea and later working in the Middle East as a chemist. He immigrated to Medicine Hat in 1953 to work at the Northwest Nitro Fertilizer Plant until his retirement. Denis married Elsie Luyten in 1957 and was an active member of St. John’s Presbyterian Church. He loved to read and would be the first in line waiting for the library doors to open in the morning. Denis spent many happy days at their cabin in Elkwater Lake and traveled extensively throughout his life. He was an avid supporter of his nieces endeavours, especially their musical accomplishments, even planning holidays around various world festivals. We will miss your vibrant approach to life, Uncle Denis, and that wonderful twinkle in your eye. We are blessed to have known you. The Funeral Service will be held at SAAMIS MEMORIAL FUNERAL CHAPEL, #1 Dunmore Road SE, on Friday, July 14th, 2017 at 10:30 a.m. with Reverend Dr. Nancy Cocks officiating. A Private Interment will take place at Hillside Cemetery. Condolences may be sent through www.saamis.com or to condolences@saamis.com subject heading Denis Jenkins. Funeral arrangements are entrusted to