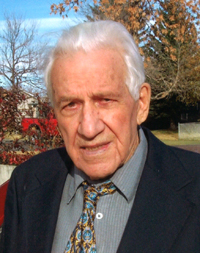 It is with great sorrow that we, the family of Otto Reinhold Hoffman, announce his peaceful passing after a courageous but brief battle with cancer on Sunday, July 16th, 2017 at the age of 94 years. Otto leaves to cherish his memory two daughters, Sandra (Robert) Tilleman and Karon (Doug) Weiss; five grandchildren, Scott, Colin (Laurel), Stephen, Kara and Michael (Jenn and her children, Aaron and Zachary); nine great-grandchildren, Curtis, Cara Lee, Emersen, Greyson, Zachery, Kimberley, Cassandra, Mack and Katelynn; numerous nieces and nephews who loved him dearly; as well as Vi Brower’s family (especially Donna Butterwick and Billie-Sue Roth and their families). Otto was predeceased by his wife, Shirley (nee Irving) in 1986; his parents, Theodore and Mary Hoffman; brothers, Albert, Emil, Walter and Ernie; sisters, Alma Smith, Hilda Weir and Mary Schwabe; as well as his friend, Vi Brower. Otto had a fantastic memory and loved playing cards. Honoring Otto’s wishes, a Graveside Service will be held at HILLSIDE CEMETERY, Gershaw Drive SW & 10 Avenue SW, on Saturday, July 22nd, 2017 at 1:00 p.m. with Reverend Jim Bredeson officiating. Those wishing to attend are asked to meet inside the cemetery gates at 12:45 p.m. No funeral reception will be held. Flowers are gratefully declined; memorial gifts in Otto’s memory may be made to the Shriners Hospitals for Children, 1003 Decarie Boulevard, Montreal, Quebec, H4A 0A9. Condolences may be sent through www.saamis.com, to condolences@saamis.com or to drweiss@shaw.ca subject heading Otto Hoffman. Funeral arrangements are entrusted to