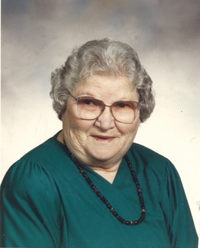 Lena Fandrick of Medicine Hat, beloved wife of the late Reinhold Fandrick, passed away on Thursday, August 17th, 2017 at the age of 97 years. Lena leaves to cherish her memory her daughter, Pearl (Lloyd) Kobberstad; two grandchildren, Todd Kobberstad, and Thane (Andrea) Kobberstad; three great-grandchildren, Desiree, Reegan, and Paige; one half-brother, Richard (Sandy) Frey; one sister, Anna Fandrick; and numerous nieces and nephews. She was predeceased by her husband, Reinhold Fandrick; her parents, Jacob and Katerine Frey; one son, Marvin Fandrick in 1966; as well as numerous brothers and sisters. Those wishing to pay their respects may do so at SAAMIS MEMORIAL FUNERAL CHAPEL, 1 Dunmore Road SE, on Sunday from 7:00 to 9:00 pm, and at SAAMIS MEMORIAL FUNERAL CHAPEL on Monday, August 21st, 2017 from 10:00 am to 12:00 pm. The Graveside Service will be held at HILLSIDE CEMETERY, Gershaw Drive and 10 Avenue SW, on Monday, August 21st, 2017 at 2:00 pm with Reverend Jim Bredeson officiating. Those wishing to attend are asked to meet inside the cemetery gates at 1:45 pm. Memorial gifts in Lena’s memory may be made to the Alzheimer Society, 201, 770 – 6th Street SW, Medicine Hat, AB, T1A 4J6. Condolences may be sent through www.saamis.com or to condolences@saamis.com subject heading Lena Fandrick. Funeral arrangements are entrusted to SAAMIS MEMORIAL FUNERAL CHAPEL CREMATORIUM & RECEPTION CENTRE, “The Chapel in the Park” #1 Dunmore Road SE, Medicine Hat, AB T1A 1Z5 (403)528-2599 www.saamis.com inquiry@saamis.com Locally owned and directed CGR Holdings Ltd.