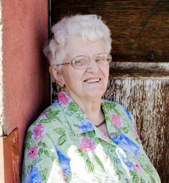 Louise was born in Shaunavon Saskatchewan to Joseph and Edith (Emond) Morrissette. Her family home was south of Ferland, Saskatchewan in the Summercove District. She was home schooled for grades 1, 2 and 3, then attended Patriotic School and then McCord School.

Louise wanted to be a Registered Nurse but circumstances did not allow for that so she became a Nurses Aid, which in today’s terminology would be an LPN. She met Mervyn Timmons from the Glen Bain District in Saskatchewan, who was at that time working on a ranch by her parent’s farm. On August 5, 1949, they were married in Swift Current Saskatchewan. There was no work that year in Saskatchewan so they moved to the Peace River Country of Alberta, where they lived outside of Berwyn and Grimshaw. On October 12, 1953 Leslie was born at the Berwyn Hospital. Work later came available at the Walt Larson Ranch east of Val Marie, Saskatchewan so they moved back. Jay Jay was born in Mankota, Saskatchewan on September 3, 1955. In 1957 they bought a ranch near Val Marie where Louise resided for many years. Murray was born in Val Marie on October 15, 1958.

In 1981 Louise moved to Claresholm, Alberta and in 1983 moved to Swift Current, Saskatchewan where she worked and resided until 2004 when she decided to move to Medicine Hat to be closer to her children who all resided in Alberta. She resided at the Garden Apartments, South Country Village until her hospitalization in June of 2017. She passed away on Friday, August 11, 2017 at St. Joseph’s Hospice, Medicine Hat. She was a life member of the United Church Women group. She loved to sing and dance, especially square dancing. She was also a member of the Minus One Club. She loved her family dearly and they loved her.

Louise loved colours (except black), but Her Favourite Color was PURPLE, wear your Purple to the Celebration of Louise’s Life at the WUERFEL AUDITORIUM, 1720 Bell Street SW, on Wednesday, August 23, 2017 at 2:00 p.m. with Reverend Bob Findley officiating. Lunch to follow at Whiskey Creek Patio and Banquet Room, 937 – 13th Street SW. A private interment will take place at Hillside Cemetery. In lieu of flowers donations can be made to the Medicine Hat SPCA, 55 Southwest Drive SW, Medicine Hat, Alberta, T1A 8E8 or the Swift Current SPCA, Box 1163, Swift Current, Saskatchewan, S0N 2Y0 or The Leprosy Mission Canada, 200 – 90 Allstate Parkway, Markham, Ontario, L3R 6H3. Condolences may be sent through www.saamis.com or to condolences@saamis.com subject heading Louise Timmons. Funeral arrangements are entrusted to