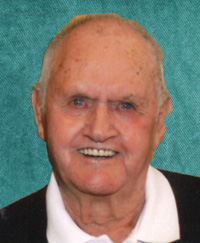 Stanley Meldrum Dockrell of Medicine Hat, beloved husband of Lillian Dockrell, of 64 years. Passed away on Sunday, August 20th, 2017 at St Joseph’s Carmel Hospice, at the age of 85 years. Stan leaves to cherish his memory his daughter, Donna (Siegfried Tessmann) Dirk; four grandchildren, Kristen (Tyler Leismeister) Bishoff, Justin (Cynara) Dirk, Denniel (Jamie Ritchie) Brown , Stephanie (Cameron) Koch; two great-grandchildren, Jordan and Hayden Koch; one daughter-in-law, Judy (Clair) Ferguson; one brother, Dennis Dockrell and family; one sister, Beatrice Prisque and family; two sisters-in-law, Elizabeth Dockrell, and Dorothea Geddes and families; one brother-in-law, Gus (Fern) Wudrich and family. As well numerous nieces and nephews. He was predeceased by one son, Robert Stanley Dockrell; his parents Josiah and Marjorie Dockrell; his in-laws, Carl & Mary Wudrich; two brothers; three sisters; Stan’s deepest love was for his family. He came to Alberta from Ontario in 1952 and married the love of his life, Lillian Wudrich, on May 15, 1953. Stan loved to hunt and fish with his son and friends. He retired from the city of Medicine Hat in 1997. At Stan’s request there will be no funeral service. Memorial gifts in Stan’s memory may be made to the Canadian Cancer Society, 325 Manning Road NE, Calgary, AB, T2E 2P5, or to St. Joseph’s Carmel Hospice, 156 – 3rd Street NE, Medicine Hat, Alberta, T1A 5M1. Condolences may be sent through www.saamis.com or to condolences@saamis.com subject heading Stanley Dockrell. Funeral arrangements are entrusted to