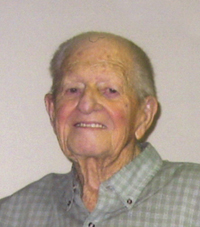 With saddened hearts, the family of William “Bill” Oliver Fode announce his passing on Monday evening, nine days short of his 94th birthday. His loving “Sweetheart” Eileen and family members were at his side. He is survived by his daughters, Carol (Harold) Hanson and Sharon (Richard) Biffart; five grandchildren and their families; nine great grandchildren and their families; and five great great grandchildren. He is also survived by his sister, Alice Wright; and brother, Leonard Fode; as well as numerous nieces and nephews. Bill was predeceased by his parents, John and Molly Fode; and one brother, Paul Fode. Bill was born and raised in Medicine Hat and at age of 18 he found his “True Love”, Eileen Gehring. They just recently celebrated 75 years of marriage! Bill was an avid hunter and fisherman and an award winning top salesman in his 2 major careers of selling cars and meat products. He was very honest in his dealings with all who came in contact with him and always gave the best deal. He had an excellent sense of humor and a great love for his family. Everyone loved “Uncle Bill” and the children knew that in his pockets there would always be gum or candy for them. Our family is extremely grateful for the kindness and loving care shown by the Angel workers at Sunnyside Care Centre where Bill resided these past 4 years. Those wishing to pay their respects may do so at SAAMIS MEMORIAL FUNERAL CHAPEL, 1 Dunmore Road SE, on Friday from 10:00 until 10:55 a.m. The Funeral Service will be held at SAAMIS MEMORIAL FUNERAL CHAPEL, on Friday, August 25th, 2017 at 11:00 a.m. with Pastor John Enns officiating. A private interment will take place at Hillside Cemetery. Memorial gifts in Bill’s memory may be made to the charity of your choice. Condolences may be sent through www.saamis.com or to condolences@saamis.com subject heading Bill Fode. Funeral arrangements are entrusted to