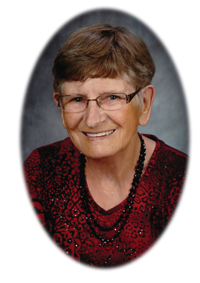 Ipelina (Lena), Slofstra nee Hazelaar of Medicine Hat, passed away at the Peter Lougheed Centre in Calgary on Friday, August 25, 2017, at the age of 79 years. Lena was born on March 14, 1938, in Sleen, Holland. Having met the love of her life, Hank Slofstra, Lena immigrated to Canada in 1962 and settled in Medicine Hat, Alberta. They were married in 1964 and together they were blessed with two children, Teresa and Peter.

An avid gardener, Lena was well known in the neighbourhood for having one of the nicest yards on Riverside. As much as she loved gardening, she also loved to cook and create something new and delicious and was famous for her croquettes, cream puffs and almond cookies to name just a few.

In her younger days, Lena would be seen walking house to house on Riverside, collecting for all charities whether it be for cancer, heart and stroke, diabetes, and the lung society and was recognized as volunteer of the year for her many years of contribution.

Her kids and grandsons were her biggest pride and joy and Oma did everything possible to ensure they were showered with her gifts of love and attention, not to mention her incredible cooking and baking treats.

Her greatest attribute was her generosity, whether of her love, time and dedication to not only her family and friends but also to anyone she met.

Lena leaves to cherish her memory: daughter, Teresa (Todd) Schile of Medicine Hat and Peter H. Slofstra of Calgary; her grandchildren, Jaren (fiancée, Skylar Valkenburg) Schile, Drayden Schile, Rylan Schile and Justin Slofstra (fiancée, Shelby Brill). She is also survived by one brother, Harm (Hennie) Hazelaar of Brampton, Ontario and Mary (Niek) van Brenk of Holland, her sister in law Janny Slofstra and brother in law Bill Aasman of Medicine Hat as well as her many friends and family members.

Lena was predeceased by her husband Hendrik Slofstra in 2014, her parents, Gezinus and Tijssina (nee van der Laan), brothers Roel and Henk Hazelaar of Holland as well as numerous in-laws, aunts, uncles, cousins, nieces and nephews.

Those wishing to pay their respects may do so at Cook Southland Funeral Chapel, 901 – 13 Street S.W., Medicine Hat on Thursday, August 31, 2017, between 12:00 Noon and 12:45 p.m. with interment following at Hillside Cemetery. The Funeral Service will be held at the Christian Reformed Church, 300 Primrose Drive S.E., Medicine Hat on Thursday, August 31, 2017, at 2:00 p.m. with Pastor George Koopmans officiating. (Condolences may be expressed by visiting our website at www.cooksouthland.com) Honoured to serve the family is

One Condolence for “LENA SLOFSTRA”