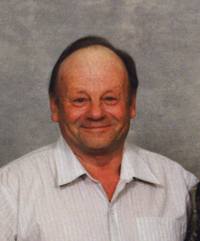 It is with great sadness the family of Lorne Yanke announce his peaceful passing on Sunday, September 10th, 2017 with his family at his side in the Medicine Hat Regional Hospital at the age of 83 years. Lorne is survived by his loving wife, Margo of 58 years; his daughter, Michele Nelson; his son, Darren (Lisa) Yanke; four grandchildren, Jesse (Taylor), Kirsten (Allister), Austin, and Kendyl; two sisters, Gladys (Elmer) Mayer and Gloria Rabb; sister-in-law, Grace Roth; as well as numerous nieces and nephews. Lorne was predeceased by his parents, John and Leida Yanke; one sister, Donna (Ralph) Murray; mother and father-in-law, Sam and Frieda Roth; and brother-in-law, Ralph Roth. Lorne was born in Medicine Hat on September 8th, 1934. He lived on the family farm until he retired in 2000. His farm was his pride and joy. We love you and miss you dearly. Those wishing to pay their respects may do so at SAAMIS MEMORIAL FUNERAL CHAPEL, #1 Dunmore Road SE, on Thursday from 7:00 to 9:00 p.m. The Funeral Service will be held at SAAMIS MEMORIAL FUNERAL CHAPEL on Friday, September 15th, 2017 at 1:30 p.m. with Reverend Chelsea Masterman and Reverend Patrick Schoenberger, co-officiating. A Private Interment will take place at Hillside Cemetery. Memorial gifts in Lorne’s memory may be made to the Canadian Diabetes Association, #102, 73 – 7th Street SE, Medicine Hat, Alberta, T1A 1J2, or to the Alberta Heart & Stroke Foundation, 340A Maple Avenue SE, Medicine Hat, Alberta, T1A 7L5. Condolences may be sent through www.saamis.com or to condolences@saamis.com subject heading Lorne Yanke. Funeral arrangements are entrusted to