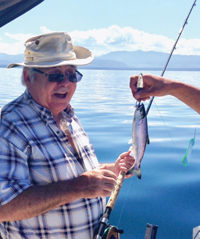 David was born and grew up in misbehaving infamy as part of the Hoose family in Redcliff, Alberta.

As a young man, he fell in love with Mary. She was wearing yellow. They married and lived in Medicine Hat where he had a long career. He and Mary moved to Vancouver Island in retirement.

David was a passionate dabbler, handyman and kind, creative soul. He was as willing to tackle a plumbing problem as a Bonzai arrangement; repair a garbage disposal as try his hand at an oil painting.

He was particular about ketchup, white bread, and potato chips. He was less particular about the tools that found refuge in his garage. His most rusted, least used tools won favoured and it seems permanent placement at the top of some particular pile or other. A prized spot, second only to the bottom of the same pile.

David found comfort and escape in being busy. He kept a long to-do list populated by the women of his life: his wife, Mary; his sister-in-law, Merle and his life-long friend, Patricia. He only half-jokingly referred to them collectively as ‘they who must be obeyed’.

David leaves a legacy in faith as a once active member of St. Barnabas Anglican Church in Medicine Hat and later, in the inception of the Light of Christ Anglican Church in Nanaimo. He embraced his community through his faith where he made his closest friends and nurtured a second family.

He is survived — and dearly missed — by his wife, Mary; his daughter, Auralyn; his Son, Steven (Jennifer); his grandchildren, Nayla, Patience, and Brooklynn; his brothers Don and Dale; his many nieces and nephews; and a host of others that called him friend.

A memorial will be held on Wednesday, November 1, 2:00pm at St. Barnabas Anglican Church in Medicine Hat – 635 4th Street SE.

Though he passed by the sea, his heart was in the prairies.

In lieu of flowers, the family asks that you consider a donation to the Light of Christ Church in Nanaimo, BC (http://www.lightofchristnanaimo.org) or the Nanaimo Regional General Hospital Palliative Care Unit (identify the unit when donating to the Nanaimo Hospital Foundation: https:// www.nanaimohospitalfoundation.com).