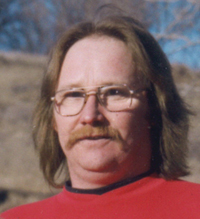 Roger “Rocky” Rath of Medicine Hat, passed away on Sunday, October 1st, 2017 at the age of 58 years. Rocky leaves to cherish his memory, his mother, Inez; one brother, Gene; one sister, Carrie; his aunts, Winny Rath, Irene (Balzar) Lanz, and Jane Grubel; his brother-in-law, Dean Nitz; two nieces, Darnyll (Lance) Nitz-Jacober and their son, Ethan, and Shareen (Justin) Nitz; his godmother, Tillier Meier; as well as numerous cousins and dear friends in Medicine Hat and Fort St. John. Rocky was predeceased by his father, Jim; one sister, Charlene; one brother-in-law, Farley; his grandparents; and his uncle, Dixon Rath. Rocky was born in Medicine Hat on July 24th, 1959 and grew up on a farm in Irvine. He attended Irvine School and Crescent Heights High School starting his autobody career in Grade 10 and continuing in Fort St. John. In 1994, Rocky started in oil and gas in Fort St. John as a pipe fitter and welding. In his younger years, he enjoyed playing cards, water skiing, curling, and playing softball. Rocky also enjoyed watching sports including wrestling, hockey, baseball, football and curling. He truly enjoyed watching “All in the Family” and being involved with the pit crew at stock car racing. Camping, fishing, and hunting were also some of his favorite pastimes. He built a dune buggy, “Odessey”, with his cousin, but his pride and joy was his yellow and black Chevy. Rocky had a simple, easy-going life and loved family holidays and spending time with friends. He and Gene took many short holidays through the years and his final week-long adventure was to BC in August. Rocky will be lovingly remembered by his family and friends. The Graveside Service will be held at SAAMIS PRAIRIE VIEW CEMETERY, 5160 Gershaw Drive SW, on Friday, October 6th, 2017 at 2:00 p.m. with Pastor Mark Bolender officiating. Memorial gifts in Rocky’s memory may be made to St. Joseph’s Home, Carmel Hospice, 156 – 3rd Street NW, Medicine Hat, Alberta, T1A 5M1. Condolences may be sent through www.saamis.com or to condolences@saamis.com subject heading Roger Rath. Funeral arrangements are entrusted to